Ahmadinejad ready to be the first Iranian sent into space 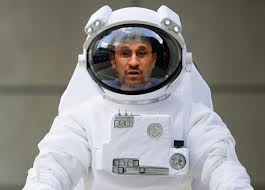 President Mahmoud Ahmadinejad said Monday that he’s ready to take the risk of being the first Iranian astronaut sent into space as part of Iran’s goal of a manned space flight.

“I’m ready to be the first Iranian to sacrifice myself for our country’s scientists,” the official IRNA news agency quoted him as saying in an address to space scientists in Tehran.

Space tourist Anousheh Ansari was the first Iranian to make a journey into space aboard a Soyuz TMA-9 capsule from Baikonur, Kazakhastan, in September 2006. The 40-year-old telecommunications entrepreneur paid a reported $20 million for a space station visit. Her journey became an inspiration to women in male-dominated Iran.

Iran sent a monkey into space last Monday, describing the launch a successful step toward Tehran’s plan to send an astronaut into space within the next five to six years. The monkey named “Pishgam,” which means pioneer in Farsi, reportedly traveled 120 kilometers (72 miles) and safely returned to Earth.

In 2010, Iran said it launched an Explorer rocket into space carrying a mouse, a turtle and worms.

Defense Minister Ahmad Vahidi said Iran will soon send a satellite into space from its Imam Khomeini space center, which is still under construction.

The news agency didn’t elaborate and did not disclose the location of the space center, but Iran already has a major satellite launch complex near Semnan, about 200 kilometers (125 miles) east of Tehran. A satellite monitoring facility is located outside Mahdasht, about 70 kilometers (40 miles) west of the Iranian capital.

Iran says it wants to put its own satellites into orbit to monitor natural disasters in the earthquake-prone nation, improve telecommunications and expand military surveillance in the region.