The all-female militias of Syria, report 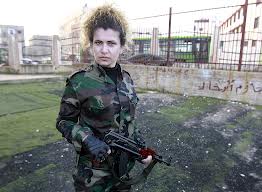 BEIRUT – The Syrian regime is arming and training Syrian women to fight for President Bashar al-Assad, putting it out in front of the Pentagon when it comes to sending women to the front lines.

A video posted on Russia Today’s Arabic channel from the central city of Homs shows dozens of women in combat fatigues marching around a training ground carrying Kalashnikovs, performing drills and chanting slogans in support of Assad. “Be prepared Syria. Stand up Assad,” they shout. “With our blood and our soul we protect you Bashar.”

The trainer explains that the women are trained to use Kalashnikovs, heavy machine guns and grenades, and taught to storm and control checkpoints. “I’m an employee, but I think it’s good to learn how to carry weapons and protect my country,” one of the recruits tells the camera.

The formation of the force comes amid speculation that the regular Syrian army, depleted by defections, desertions and thousands of casualties, is becoming stretched by the effort to suppress Syria’s 22-month-old uprising. According to a report in Britain’s Independent newspaper, the all-female force, named the “Lionesses for National Defence,” is part of an effort to supplement the army with a National Defense Force militia made up of civilian volunteers.

The women have already been deployed on the streets, and though their duties seem confined to checkpoint control, the frequency of rebel attacks against government checkpoints effectively puts them on the frontline. A blurry video posted by activists shows female soldiers at a checkpoint in Homs, and activists in the city say they are often to be seen guarding pro-regime neighborhoods, focusing their attention on women wearing headscarves.

“They force women out of cars with deliberate roughness, rip off their veils and scream insults at them,” said Majd Amer, the pseudonym of an activist in Homs interviewed by Skype. “They treat them like they are female terrorists. They call them al-Qaeda … and say, ‘the veil won’t protect you.’”

Assad’s regime repeatedly emphasizes its secular roots in the battle against an increasingly Sunni Islamist rebellion, helping sustain the support of minorities such as the Christians and his own Alawite sect, but also further accentuating the country’s sectarian divide. A woman wearing a headscarf would be assumed to be Sunni, and therefore fall under suspicion as a possible supporter of the revolution.

Likewise, said Amer, “It is impossible that a lady wearing the veil would join this militia.” 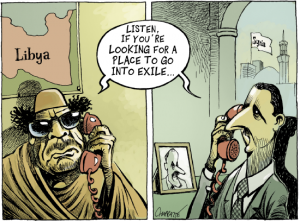 The Independent likens the “Lionesses” to the female bodyguards maintained by the late Libyan leader Col. Moammar Gaddafi, who was as notoriously fond of surrounding himself with women as he was of persecuting Islamists.

It is not, however, the first time Syrian women have served in the military. A bizarre video dating back to the 1980s shows a platoon of female soldiers biting the heads off live snakes at a military parade in front of Assad’s father and predecessor, President Hafez al-Assad. The women then don aprons, barbecue the snakes and eat them.

The video surfaced last year after former U.S. Defense Secretary Donald Rumsfeld reportedly posted it on his Web site, saying it had been given to him by the former Iraqi dictator Saddam Hussein – a sworn foe of Assad – during a secret visit he made to Baghdad in 1983 as Mideast envoy.