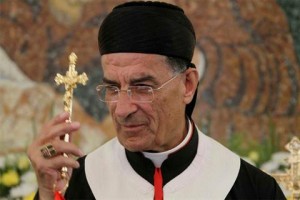 Maronite Patriarch Beshara al-Rai did not reportedly endorse the so called Orthodox Gathering proposed electoral law, or any other law according to a report by al-Mustaqbal newspaper published on Thursday.

A source close to the patriarch Rai told the daily: “ He had not endorsed any electoral law over another… he only voiced his objection to the 1960 electoral law .”

“The patriarch had facilitated dialogue at Bkirki for the Christian factions to reach an agreement over a new law where he simply encouraged their agreement over any draft law that appeases Christians and the Lebanese people,” he added.

“The patriarch did not endorse any particular law but encouraged them to come up with a law that achieves fair representation,” he said.

Even the Greek Orthodox lawmakers are not endorsing the Orthodox Gathering proposed electoral law..

Lebanon Deputy Speaker Farid Makari , who is Greek Orthodox told An-Nahar newspaper in remarks published on Wednesday that he disagrees with Speaker Nabih Berri’s announcement in which he pledged prior approval of the decision on the electoral law by the Christian leaders and their representatives who meet in Bkirki last Sunday.

The subcommittee tasked with deciding on an electoral law acceptable to the majority of the Lebanese resumed its meetings on Tuesday with representatives from the rival March 8 and 14 camps .