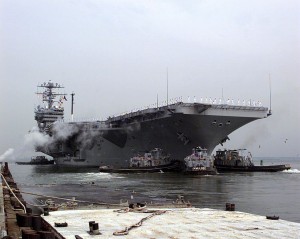 The USS Eisenhower, an American aircraft carrier that holds eight fighter bomber squadrons and 8,000 men, arrived at the Syrian coast yesterday in the midst of a heavy storm, indicating US preparation for a potential ground intervention.

While the Obama administration has not announced any sort of American-led military intervention in the war-torn country, the US is now ready to launch such action “within days” if Syrian President Bashar al-Assad decides to use chemical weapons against the opposition, the Times reports.

Some have suggested that the Assad regime may use chemical weapons against the opposition fighters in the coming days or weeks.

“We have (US) special operations forces at the right posture, they don’t have to be sent,” an unnamed US official told The Australian, which suggested that US military troops are already near Syria and ready to intervene in the conflict, if necessary.

If the US decides to intervene militarily in Syria, it now has at its disposal 10,000 fighting men, 17 warships, 70 fighter-bombers, 10 destroyers and frigates and a guided military cruises.