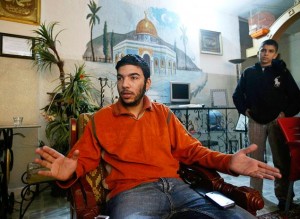 The families of Lebanese men killed in Syria last week say their relatives were more interested in nice clothes and vacations than fighting a civil war. Yet Syrian President Bashar Assad’s regime branded them foreign jihadists — and their deaths set off three days of new spillover violence.

Gunmen loyal to opposite sides in Syria’s civil war battled Wednesday in the streets of the Lebanese city of Tripoli. The fighting has killed six people and wounded nearly 60 since Monday, security officials said.

The bloodshed is a sign of just how vulnerable Lebanon is to getting sucked into the Syrian crisis. The countries share a porous border and a complex web of political and sectarian ties that is easily inflamed.

Among the 17 Lebanese men who turned up dead in Syria last week were Bilal al-Ghoul and his childhood friend, Malek Haj Deeb, both 20. Malek’s older brother, Jihad, said the two men sympathized with the rebellion, but they were not fighters.

“Malek used to see the videos of dead Syrians and cry,” Jihad Haj Deeb told The Associated Press in Tripoli, as gunfire and explosions echoed near his home in the poor neighborhood of Mankoubeen. “He used to say, ‘May Bashar fall soon, God willing.'”

A giant poster hung in the entrance of the home, with photos of three of those killed in Syria and a sign that read: “Our dead are in heaven, and yours are in hell.”

Haj Deeb and Bilal al-Ghoul’s older brother, Omar, said the men must have been kidnapped and handed over to Syrian authorities by a pro-Syrian Lebanese group. They said their brothers were not members of any political or Islamic group but were observant Muslims.

“My brother doesn’t know how to hold a rifle,” Haj Deeb said.

The Lebanese men killed in Syria were Sunni Muslims, like the majority of rebels trying to overthrow Assad’s regime. Assad and much of his inner circle belong to the Alawite sect, which is an offshoot of Shiite Islam.

The fighting in Lebanon comes at a time of deep uncertainty in Syria, with rebels battling government troops near Assad’s seat of power in Damascus.

In Brussels, U.S. Secretary of State Hillary Rodham Clinton reiterated concerns that “an increasingly desperate Assad regime might turn to chemical weapons” or lose control of them to militant groups.

She also said NATO’s decision on Tuesday to send Patriot missiles to Turkey’s southern border with Syria sends a message that Ankara is backed by its allies. The missiles are intended only for defensive purposes, she said.

Turkish Foreign Minister Ahmet Davutoglu was quoted Wednesday in the Turkish newspaper Sabah as saying that Syria has about 700 missiles, some of them long-range.

Syria has been careful not to confirm it has chemical weapons, while insisting it would never use such weapons against its own people.

But as the regime wobbles, there are fears the crisis will keep spiraling outside its borders. Fighting has spilled over into Turkey, Jordan and Israel since the uprising began more than 20 months ago, but Lebanon is particularly susceptible.

Seventeen times bigger than Lebanon and four times more populous, Syria has long had powerful allies there, including the Iran-backed militant group Hezbollah. For much of the past 30 years, Lebanese have lived under Syrian military and political domination.

That grip began to slip in 2005, when former Prime Minister Rafik Hariri was assassinated in Beirut. Widely accused of involvement — something it has always denied — Syria was forced to withdraw its troops. But Damascus has maintained power and influence in Lebanon.

Bassam al-Dada, a political adviser for the rebel Free Syrian Army, said the group believes the Lebanese men were the victims of a “complicated Syrian intelligence operation” aimed at showing that foreign fighters are involved in fighting in Syria.

According to their relatives, Malek Haj Deeb and Bilal al-Ghoul left their parents’ homes a week ago saying they were going to downtown Tripoli. Hours later, the families grew concerned and started calling the men’s mobile phones.

There was no sign of them until two days later, when local media reported that a group of Lebanese citizens had been killed while fighting in Syria.

Pictures of the men, shown to the AP by their families, showed them clean-shaven and playing in the snow in one of Lebanon’s mountain towns, and in front of Tripoli’s Crusader-built citadel.

“We want their bodies back,” Omar al-Ghoul said.

Members of the International Committee of the Red Cross visited the dead men’s families on Tuesday and took details about the men, their brothers said.

Jihad Haj Deeb said his brother was about to resume his college studies and would not have jeopardized his future to fight in Syria.

“He registered at the university four days before he went missing,” Haj Deeb said, adding that his brother took 500,000 pounds ($335) from their father to pay his tuition at Lebanese University, where he was a third-year mathematics student. Haj Deeb’s father, a school bus driver, makes $400 a month and has nine other children.

“Had he been planning to go to Syria, he wouldn’t have registered,” added Jihad, saying his father had to borrow the money.

Meanwhile, the unrest inside Syria shows no sign of slowing down.

The uprising began with peaceful protests in March 2011 and later escalated into a civil war that the opposition says has killed more than 40,000 people.

Besides the violence roiling the capital, Damascus, there was growing speculation about the fate of a top Syrian spokesman who has become a prominent face of the regime.

Lebanese security officials have said Foreign Ministry spokesman Jihad Makdissi flew Monday from Beirut to London. But it was not clear whether Makdissi had defected, quit his post or been forced out. Syria has had no official comment on Makdissi, who has defended the regime’s crackdown on dissent.

Photo:Jihad Haj Deeb, 22, the brother of Malek ( Haj Deb) , 20, who was one of several of the young Lebanese men who were killed in neighboring Syria’s civil war last week, speaks during an interview with the Associated Press. He told AP “My brother doesn’t know how to hold a rifle.”