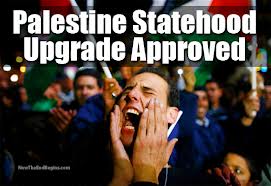 It was hard to read the delegates’ expressions as they squinted at the board in the United Nations, searching for confirmation of who had and hadn’t voted for Palestine. As the camera zoomed into the results, the red figures revealed 138 countries were in favour, nine against with 41 abstaining; Palestine had won an overwhelming majority in their bid to reach non-member observer status at the UN.

A close up on the Israeli delegates suggested that they were less than impressed. Since then, Netanyahu has given all the usual excuses to downplay the Palestinian bid: “peace can (only) be achieved through reaching an agreement between Jerusalem and Ramallah, and not by unilateral statements made at the United Nations,” he said.

The news wasn’t what America wanted to hear either. Believing the application “undermines” peace negotiations between Israel and Palestine, the United States have threatened to withdraw funding from the Palestinian Authority in the event of an upgraded status.

It’s likely that they’re not bluffing either. When Palestine were accepted by the United Nations Education, Scientific and Cultural Organisation (UNESCO) last year, the United States, who previously provided 22% of its national budget, withdrew all funding.

Fear from the European Union that they might have to foot the bill if America withdraw their dollars has not seemed to affect too many votes. Of the 27 countries in the EU only the Czech Republic voted no. The others were divided between abstaining and a straightforward ‘yes’.

Germany and the UK, who were seen as key players in the vote, abstained, only to prove they were countries that chose what Washington want, not the desires of their own populations.

The results of a recent poll conducted by YouGov reveal that in the UK 59% of the population thought their government should vote in favour of a Palestinian state, in Germany 86%. It was only France, the third important country, which voted in favour of Palestine; in line with the 69% of the French public who also thought it was right course of action.

The results of a recent poll conducted by YouGov reveal that in the UK 59% of the population thought their government should vote in favour of a Palestinian state, in Germany 86%. It was only France, the third important country, which voted in favour of Palestine; in line with the 69% of the French public who also thought it was right course of action.

It’s interesting to compare yesterdays ballot to how European countries voted in Palestine’s UNESCO bid. Italy, Portugal, Denmark and Switzerland moved from abstain to yes. Sweden changed from no to yes. Germany, the Netherlands and Lithuania switched from no to abstain.

Are the results of Palestine’s bid for statehood the beginning of the end of Israel’s hold in Europe? They certainly suggest a considerable shift from 2011.

Support from many in the European Union falls in line with their basic principles; it is a bloc that has long prided itself on upholding human rights, something Israel is considered to be perpetually in violation of. It sends a message of hope that justice is possible to the Palestinians. Abbas has made it clear that he does not want to terminate peaceful negotiations, and the bid at the UN hoped to “breathe new life” into the process.

The European vote provides a more assertive, diplomatic approach to the conflict, which sharply contrasts Israel’s use of force and imposition of irreversible occupation in Palestine. This is a small step that can be built upon for the future. It could give Europe the confidence to execute practical policies; leveraging its import and export power in Israel, through boycotts, could be a start.