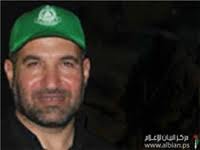 Israel killed the military commander of Hamas in an airstrike on the Gaza Strip Wednesday, bringing the two sides to the brink of a possible new war.

The attack came despite signs that Egypt had managed to broker a truce between Israel and Palestinian militants after a five day surge of violence which saw more than 100 missiles fired out of Gaza and repeated Israeli strikes on the enclave.

Islamist Hamas said Ahmed Al-Jaabari, who ran the organization’s armed wing, Izz el-Deen Al-Qassam, died along with a passenger after their car was targeted by an Israeli missile.

Israel’s Shin Bet domestic intelligence service confirmed it had carried out the attack, saying it had killed Jaabari because of his “decade-long terrorist activity”.

“The purpose of this operation was to severely impair the command and control chain of the Hamas leadership,” the Israeli military said in a statement.

Immediate calls for revenge were broadcast over Hamas radio and smaller groups also warned of retaliation.

“Israel has declared war on Gaza and they will bear the responsibility for the consequences,” Islamic Jihad said.

A Reuters witness reported there were multiple Israeli airstrikes against the coastal enclave, but it was not immediately clear what else had been targeted.

Hamas has governed Gaza since 2007 and does not recognize Israel’s right to exist. It has been emboldened by the rise to power in neighboring Egypt of its spiritual mentors in the Muslim Brotherhood whom it views as a “safety net”.

Israel last staged a full-scale attack on Gaza during a three week conflict in 2008 and 2009 in which 1,400 Palestinians and 13 Israelis were killed.