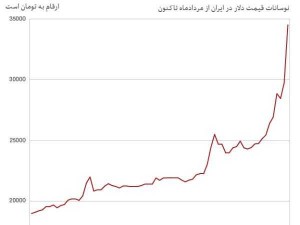 “Most of my customers just look at products behind the window and pass,” said Behrouz Madani, 42, who owns a butcher shop in northwest Tehran. “I see them going to the next store, which is a bakery, to feed their families with bread.”

Iran’s rial is in a tailspin, having lost more than half of its value against the dollar in street trading in the past two months as U.S. and European sanctions aimed at curbing the country’s nuclear program bite. Riot police yesterday fired tear gas and sealed off parts of downtown Tehran after the currency’s plunge triggered street protests.

Security forces were also sent to the city’s bazaar after shopkeepers refused to open. The inflation rate, estimated by Parliament Speaker Ali Larijani at 29 percent last week, has accelerated to the point where the price of milk in Tehran rose 9 percent yesterday.

The economic situation has “reached a point where it becomes almost impossible not to show reaction,” said Anoush Ehteshami, professor of international affairs at Durham University in the U.K.

The rial is falling as sanctions eat into Iranian oil exports and foreign currency earnings. The currency dropped about 18 percent on Oct. 1, reaching 35,000 to the dollar on the unofficial market. The currency traded at 36,100 yesterday, the state-run Mehr news agency said, though traders in Tehran said most exchange houses have halted dealing in the greenback. That compares with the official value of 12,260 rials per dollar set by the central bank.

Most Iranians can’t access that rate apart from some importers of essential goods such as medicines, meat and grains.

People “are nervous about tomorrow and next week because they don’t know how much more expensive things will be,” said Mostafa Daryani, 52, whose family owns a Tehran supermarket chain. “They only buy their daily needs and ignore most of the things that are not urgent for daily life. Instead of one bottle of milk, they buy two.”

Prices of home appliances have doubled in the past six months and some shopowners prefer to hoard goods rather than sell them in the hope that they can get higher prices in the future, said Yahya Ebrahimi, 48, who owns an electronics store in central Tehran. Merchants are increasingly using the dollar value of items as the basis for sales, he said.

Madani, the butcher, says the cost of chicken, a staple in the country, has doubled in the past year.

President Mahmoud Ahmadinejad has sought to ease tensions in the country, saying in an Oct. 2 press conference that the situation will improve and there was “no economic justification” for the rial’s dive.

That’s clear on the streets of Tehran.

Daryani’s brother, Mohsen, said their supermarket chain started to delay purchases of inventory this week due to the rial’s fall.

“We stopped making large purchases because prices aren’t fixed,” Mohsen Daryani said “Factories are changing the final cost of their products because of the changes in the foreign currency exchange rate every second.”

The economic squeeze “is a very serious problem for the Iranian regime, because it threatens its socio-economic stability,” Ehteshami said. “To really deal with the crisis will require stabilizing the economy by reducing the sanctions, which is really a political decision, not an economic one.”

Western powers say Iran is hiding a nuclear-weapons program and the U.S. and Israel have raised the possibility of military strikes against its atomic installations. Iran says its nuclear program is peaceful and aims to make electricity.

Israeli Prime Minister Benjamin Netanyahu has been calling for a “clear red line” to be drawn on Iran’s uranium- enrichment program after which force could be used. U.S. officials have refused to take such as step and have said that sanctions and diplomacy must be given the chance to work.

“There are all sorts of public discussions going on now between the parliament and the executive branch about the handling of macro-economic issues, especially the currency,” Ehteshami said. That said, Supreme Leader Ayatollah Ali Khamenei “‘has made it his badge of honor to not yield under pressure.”

For Akbar Mohebi, a retired Daryani supermarket clerk, the tougher times mean that his son has to cancel plans for studying abroad.

‘Yesterday, I told him forget about your dream,” Mohebi said. “Darker days will come to us.”