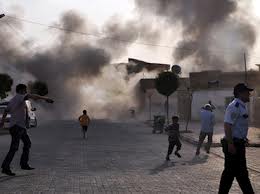 Ambassadors from the alliance’s 28 member nations held an emergency late-night meeting at NATO headquarters, at Turkey’s request, to discuss the strike.

The shelling “constitutes a cause of greatest concern for, and is strongly condemned by, all allies”, the NATO ambassadors said in a statement.

“The alliance continues to stand by Turkey and demands the immediate cessation of such aggressive acts against an ally, and urges the Syrian regime to put an end to flagrant violations of international law,” the statement added.

It said recent aggressive acts by Syria were a “clear and present danger to the security of one of (NATO’s) allies”.

It was a rare meeting under Article 4 of the NATO charter which provides for consultations when one member feels its territorial integrity, political independence or security is under threat.

The meeting ended after about 40 minutes with the strong statement of alliance solidarity with Turkey.

Turkey asked for the meeting after a mortar bomb fired from Syria landed in a residential district of the southeastern Turkish town of Akcakale, killing a woman and four children from the same family and wounding at least eight other people.

In the most serious cross-border escalation of the 18-month uprising in Syria, Turkey’s armed forces responded by hitting targets inside Syria.

Turkey’s NATO ambassador Haydar Berk briefed the meeting on a number of recent cross-border shelling incidents and also told them of Turkey’s response, which was aimed at military targets in Syria, a NATO diplomat said.

A Turkish official in Brussels said Turkey was extremely pleased with the solidarity displayed by NATO allies.

No further NATO meetings on the issue are planned but as it is an Article 4 matter it remains on the alliance’s agenda.

NATO Secretary-General Anders Fogh Rasmussen has said repeatedly that NATO has no intention of intervening in Syria, as it did in Libya last year, but stood ready to defend Turkey, if necessary.

NATO defense ministers are due to meet in Brussels next week. Syria is not on the agenda but diplomats said ministers could choose to raise any subject they wished.

NATO ambassadors held a similar meeting under Article 4, at Turkey’s request, in June after Syria shot down a Turkish military plane.

That meeting was only the second time in NATO’s 63-year history that members had convened under Article 4.

Wednesday’s statement was much tougher than the one issued after the June meeting.

Ambassadors met earlier on Wednesday for a regular meeting, but many of them would have left NATO headquarters for the day and had to be recalled for the late-night meeting.