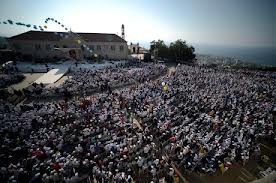 Pope Benedict XVI told Syrians at a rally for young people Saturday that he admired their courage and that he does not forget those in the Middle East who are suffering.

On a day of appeals for religious freedom in the region, he said it was time for Muslims and Christians to work together against violence and war. He spoke on the second day of his visit to Lebanon, a country with the largest percentage of Christians in the Middle East. He arrived amid a wave of violent demonstrations over an anti-Islam film across the Muslim world.

Addressing the rally, Benedict said he understood that there were young people present from Syria in the crowd of some 20,000 people.

“I want to say how much I admire your courage,” the pope said, speaking French. “Tell your families and friends back home that the pope has not forgotten you. Tell those around you that the pope is saddened by your sufferings and your grief.”

“I want to say how much I admire your courage,” the pope said, speaking French. “Tell your families and friends back home that the pope has not forgotten you. Tell those around you that the pope is saddened by your sufferings and your grief.”

Traveling to Lebanon on Friday, Benedict called for a halt in weapons deliveries to Syria, but he did not draw a distinction between the government and rebel sides. Lebanon has given refuge to nearly 70,000 of a quarter-million Syrians who have fled their country’s increasingly bloody civil war.

The turmoil stemming from the Arab Spring has deeply unsettled the Middle East’s Christian population, which fears being caught between rival Muslim groups. Part of the pope’s mission in Lebanon is convincing his flock to remain in the region despite war, sectarian violence and hardship.

“It is time for Muslims and Christians to come together so as to put an end to violence and war,” he said.

Earlier Saturday, he appealed for religious freedom, calling it central to stability in a region bloodied by sectarian strife.

“Let us not forget that religious freedom is a fundamental right from which many other rights stem,” he said, speaking in French to government officials, foreign diplomats and religious leaders at the presidential palace in Mount Lebanon in the southern suburbs of Beirut.

He held up Lebanon, which is still rebuilding from a devastating 1975-1990 civil war largely fought on sectarian lines, as an example of coexistence for the region.

He said Christians and Muslims in Lebanon share the same space — at times in the same family — and asked, “If it is possible in families why not in entire societies?” Marriages where husband and wife are from different religious groups are not uncommon in Lebanon.

“It is time for Muslims and Christians to come together so as to put an end to violence and war,”

He said the freedom to practice one’s religion “without danger to life and liberty must be possible to everyone.”

The papal visit comes amid soaring sectarian tensions in the region, exacerbated by the conflict in Syria, which is in the throes of an 18-month-old civil war. A predominantly Sunni opposition in the Sunni-majority country is fighting to topple President Bashar Assad whose regime is dominated by Alawites, an offshoot of Shiite Islam.

Christians, who make up about 10 percent of Syria’s population, say they are particularly vulnerable to the violence sweeping the country of 22 million people. They are fearful that Syria will become another Iraq, with Christians caught in the crossfire between rival Islamic groups.

Thousands of Christians have fled areas where heavy fighting has taken place, including the once religiously mixed central city of Homs. Rebels have controlled Homs’ Christian neighborhoods of Hamidiyeh and Bustan Diwan since early February and most of the districts’ residents have fled.

On Saturday, a Syrian priest from Homs said the Archdiocese of Syriac Catholics in Hamidiyeh was torched this week. The motives behind the attack were unclear.

The priest, who wished to remain anonymous for fear of reprisals, told The Associated Press by telephone that the attack took place Thursday. He said residents tried for 14 hours to put out the raging fire because fire engines could not reach the area under rebel control. No further details were immediately available.

He said around 80,000 Christians used to live in Hamidiyeh but now only 85 people remain.

In Lebanon, enthusiastic crowds lined the streets and cheered along the 30-kilometer (19-mile) motorcade route to the palace as Benedict went by Saturday in the bullet-proof glass popemobile. Soldiers on horseback rode ahead of the car.

As the pope arrived in the presidential compound, officials released about 20 white doves.

Just hours after the pope arrived Friday, violence erupted in northern Lebanon over “Innocence of Muslims,” a film that ridicules the Prophet Muhammad, portraying him as a fraud, a womanizer and a child molester.

According to Lebanese security officials, a crowd angry over the film set fire to a KFC and a Hardee’s restaurant in the port city of Tripoli, 85 kilometers (50 miles) north of Beirut, sparking clashes with police. Police then opened fire, killing one of the attackers, the officials said.

At least 25 people were wounded in the melee, including 18 police who were hit with stones and glass. The officials spoke on condition of anonymity because they were not authorized to brief the media.

Lebanese authorities tightened security for the pope, suspending weapons permits except for politicians’ bodyguards and confining the visit to central Lebanon and northern Christian areas.

In the evening, Benedict will address thousands of youths from across the Middle East.