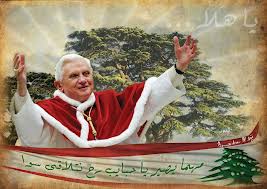 In 1510, Pope Leo X thanked Divine Providence for having preserved the Maronite Christians through the hardest of times, “planted among infidels, schismatics and heretics as in a field of error”.

He described them as a “rose among thorns, an impregnable rock in the sea, unshaken by the waves and fury of the thundering tempest”.

Today, more than five centuries later, Pope Benedict will reassert this message of survival in a hostile environment in a three-day visit to Lebanon.

His visit comes at a time when Christians in the region feel their existence threatened by the rise of political Islam. It also coincides with violent protests in Libya and Egypt against film, made in the United States, that is insulting to Islam.

In this small country where, uniquely in the Arab world, Christians have held the political reins since independence in 1943, the Christian communities feel menaced.

Across the Arab world, Christians feel like a species facing extinction, threatened by Islamist fanatics, driven by a lack of opportunity at home to seek better lives abroad, and now fearful of the post-revolution order which in some countries has brought Islamists to power.

Christians now make up about 5 percent of the Middle Eastern population, down from 20 percent a century ago. If current pressures and their low birth rates continue, some estimates say their 12 million total could be halved by 2020.

FEELING OUT OF PLACE

While some Christians in Lebanon felt exhilarated by the uprisings that swept the Middle East over the past two years, ending decades of dictatorships, they look with foreboding at Islamist movements, based on hardline ideology and with little tolerance towards minorities. The Islamists have been the only forces organized enough to fill the power vacuum.

“We are in a new critical situation,” said Monsignor Paul Matar, Archbishop of Beirut for the Maronites. “The Christians of course are alarmed. They ask will the Arab world regress?”

“The Islamists should know, that even if they have gained power, that there are others who exist in this region and that they are equal citizens.”

For many Christians the rise of political Islam is changing the nature of the uprisings that toppled four autocrats in Tunisia, Egypt, Yemen and Libya and has placed one under siege in Syria. They had hoped for a broad movement that would lead these countries to democracy but got instead Islamists, who they believe will eventually impose stricter social codes. 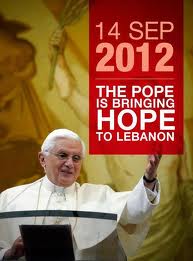 For many Christians, memories of Iraq are fresh. The sectarian killings that followed the U.S. invasion of Iraq in 2003, and the mass exodus of Iraqi Christians, created a trauma.

Of all the revolutions that have dismantled the old order, none terrifies leaders of the religious minorities in the Middle East more than Syria’s, the bloodiest chapter in the Arab upheaval.

Their fear is that the ousting of one minority – the Alawites through whom the Assad family has ruled Syria for four decades – will uncage sectarian forces that threaten minorities.

Many close observers of Syria do see the possibility of the Iraqi scenario being repeated.

Were that to happen, they see a strong likelihood that the Christians of Syria, caught in the cross-fire of the power struggle between Shi’ite and Sunni Muslims, would feel compelled to leave.

What leaves the Christians of Syria particularly exposed is the position of most of their top clerical leadership, which chose to ally itself with the Assad dynasty.

The crisis in Syria has also polarized Christians in neighboring Lebanon, long dominated by Damascus. Some Christians are excited about the prospects of toppling Assad but others are haunted by what may come after his demise.

In Lebanon itself, Beshara Rai, the Maronite Patriarch, in a statement ahead of the Pope’s visit appeared to be warning Christians of the consequences of actions that open the way to Islamist forces. “We need to be aware of what is going on and read events carefully so that we do not become tools to achieve foreign schemes”, the Patriarch said.

Rai, who in an interview with Reuters this year described Assad’s Syria as “the closest thing to democracy in the Arab world”, drew attention to plots being hatched across the region.

Ignatius Hazim, Patriarch of Antioch and the Greek Orthodox Christians in Syria, praised Assad for “reforms undertaken”. While he and his clerical peers may be accurately conveying the unease among Arab Christians about the future, they are also placing their congregations in the camp of the dictatorship.

Leading intellectuals from the region fear the consequences.

The regional struggle within Islam between the region’s Sunnis and Shi’ites – exacerbated after the invasion of Iraq replaced the Sunni rule of Saddam Hussein with majority Shi’ites – terrifies not just the Christians but other minorities such as the Alawites, Druze, or ethnically distinct Kurds.

The Maronites survived 15 centuries of largely Islamic rule thanks to a mixture of obstinacy, ferocity and Western patronage. When France created greater Lebanon in 1920 after the collapse of the Ottoman empire, it awarded them the leading role in the state.

Ruling Lebanon through the Maronite sect, the Christians not only fought their Muslim rivals but each other during the 1975-90 civil war. They emerged defeated and divided between factions now allied with the Shi’ites, led by Hezbollah, and remnants from the Phalange Party in league with the Sunnis.

The 1989 Taif peace pact which ended the war stripped them of their monopoly by dividing power equally between Christians and Muslims, while war and emigration have reduced their numbers to about one-third of the four million population.

The pressure to emigrate is intense, and better education and Western contacts enables it.

“We are in a delicate time. We should be patient because we were here long before Islam,” said Archbishop Matar. “We won’t leave. We can have a role in stabilizing the Middle East.”

Many Arab Muslims, who see Christians offering a culturally enriching window on the world, are also committed to this view.

“The justification of Lebanon’s existence is that it has Christians and Muslims and various other sects. If these sects don’t exist, of course, the foundation of the country will cease to exist,” argues Amin Maalouf, the prize-winning Lebanese-born French novelist and essayist.

“Throughout history when a country expels its minorities it creates a disaster for itself,” Maalouf said. “Each time the minorities leave a country, even if their number is very small, the country gets impoverished. The minorities in any country in the world are an important yeast”.

“To put myself in the shoes of Arab Christians all I can say is I watch their predicament with horror,” says Tarif Khalidi, a scholar of Islam and author of “The Muslim Jesus”.

The Christians, Khalidi argues, “in many ways, were the agents of Westernization and the contacts between the (west) and Muslims in the awakening in the 19th century. It was a classic instance of Muslim-Christian renaissance. This symbiosis, if it is in any sense endangered, will be catastrophic,” extinguishing a vibrant history of tolerant coexistence.

“Had there been a Nobel peace prize for the middle ages it would be given to Arabic civilization. I cannot see a more impressive record of inter-sectarian coexistence and pluralism.”

Excitement and pride over the Pope’s visit have replaced fear and anxiety among Christians at least for now.

Churches across Lebanon will toll their bells on his arrival. White and yellow candles will be lit at night on every Christian balcony.

His pictures are hanging on churches and street lights. Churches across the country will bus their own adherents to attend the open-air mass on Sunday in the seafront of Beirut, rebuilt from the ashes of the civil war.

“Lebanon is more than a country, it is a message to the East and to the West,” reads a banner with a picture of Benedict.

Many Lebanese Christians believe Pope Benedict is coming with a strong message for them not to abandon their land.

Attending mass at the Saint Elias church, Ruba Tawk, 39, said: “The pope’s visit will shine the light on Lebanese Christian identity and its survival at a time when they are facing a grave danger from Islamists pressuring them to leave”.

Like many Christians and even some Muslims she summed up the value of being a Christian in a sea of Islam.