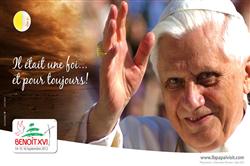 Lebanon announced strict security measures during Pope Benedict XVl’s three day visit to Lebanon from Friday September 14 to Sunday September 16. The measures include suspension of flights at Beirut’s only airport, restricting parking on several roads and diverting traffic in several areas of the capital.

Beirut airport authority announced that it will suspend airport traffic at Rafik Hariri International Airport from 1:15 p.m. to 3:00 p.m. on Friday and from 6:00 p.m. to 7:30 p.m. on Sunday.

The Beirut airport authority called on those who currently work at the airport to inform their employees of the importance of parking their cars in al-Kharafi parking on the date of arrival and departure of Benedict XVl.

Beirut airport authority also demanded all airlines to inform their passengers to arrive at the airport three hours prior their flights.

The Public Relations Department at the Directorate General of the Internal Security Forces announced the following road diversions during the pope’s visit :

On Saturday September 15: No Parking will be allowed from 7:00 am to time 2:00pm following roads: from Fouad Chehab stadium, to the Baabda presidential Palace

1- Emile Lahoud Boulevard from Sayyad roundabout to Karantina Bridge; traffic will be deviated towards Ashrafieh.

2- Pierre Gemayel Boulevard from the Dkhouliyeh Intersection to the Judicial Palace’s tunnel.

Traffic will be diverted in several sections of Beirut

All traffic will be suspended from 8:00 am on Friday until the end of the Pope’s visit from Harissa highway to Fouad Chehab Stadium in Jounieh. Road signs will divert the traffic to other roads.

Traffic will also be suspended on the coastal road from the Donniyeh Bridge to the Karantina Bridge as follows:

No Trucks or heavy vehicles will be allowed on the roads in Beirut, Mount Lebanon, Kesserwan and Metn throughout the Pope’s visit