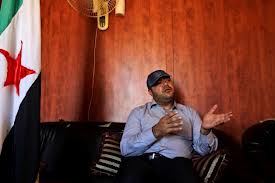 A Syrian rebel commander holding 10 Lebanese Shiites hostage said Thursday he is willing to release the men but fears doing so could set off a wave of reprisal attacks by Sunni extremists.

What began as an effort to force Lebanon’s Shiite militant group Hezbollah to stop supporting the Syrian regime has become the latest flashpoint in a conflict with growing sectarian overtones.

The rebel leader behind the kidnappings, Ammar al-Dadikhli, is a burly former cross-border trader who goes by the nom de guerre Abu Ibrahim. His 1,200-strong Northern Storm Brigade controls the vital crossing from Syria’s Aleppo province into neighboring Turkey, and in May he ordered the seizure of the Lebanese Shiites, who had been on a bus tour of religious sites in the area, on the grounds they belonged to Hezbollah.

He said the kidnappings were aimed at persuading Hezbollah, a strident backer of President Bashar Assad, to reconsider its commitment to the Syrian regime. Instead it set off a string of revenge kidnappings by Shiite clansmen inside Lebanon, with two Turks and some 20 Syrians being snatched by gunmen. All but four of the Syrians have since been released, with the last Turk freed Thursday night.

The stakes are high. If anything were to happen to the Lebanese hostages, who by all accounts have been well treated, it would ignite Shiite rage and set fire to Lebanon’s already delicate sectarian balance.

On Aug. 24, Abu Ibrahim moved to defuse the situation by releasing one of the hostages, 60-year-old Hussein Omar, to the Turkish authorities.

Omar told media outlets he had been well treated, but the expected release of the 10 others failed to materialize. Abu Ibrahim said Thursday he is holding on to the others for their own safety.

“After (Omar’s) release, the Northern Storm brigade began to receive threats from Sunni extremist groups in Lebanon, Iraq and some in Syria,” Abu Ibrahim told The Associated Press in an interview at a customs house in this Syrian border town.

“They told us, the hostages are members of Hezbollah and should be killed.”

Though both broadly share anti-U.S. attitudes, militant Shiite and Sunni groups have been rivals in the region for decades. Sunni hard-liners consider Shiites to be heretics, while Shiites complain of centuries of oppression at the hands of their rival Muslim sect.

In Syria, Sunni jihadists appear to want to impose their vision of a sectarian conflict on the uprising, which started with largely secular calls for change against an authoritarian regime and has morphed into a civil war. The extremists — whose role in the conflict appears to be on the rise — point out that the regime is dominated by Alawites, an offshoot of Shiite Islam, with close ties to Iran.

Abu Ibrahim said he fears his men will be attacked by Sunni extremists if he releases the Lebanese Shiites and that the hostages will also be targeted.

“We would like to make a deal and turn them over to one of the great powers, like the United States, to protect ourselves and them, so those extremists won’t harm them,” he said. “If they are handed back to Lebanon, they will be targeted, but if they are given to a big country, it will be like an international deal.”

Despite condemning the regime’s use of heavy weapons against civilians and providing some humanitarian aid to the rebels, Western powers have steered clear of any direct intervention into the 18-month old conflict that activists say has claimed more than 20,000 lives.

It is also doubtful that the United States, already reeling from a series of attacks on its embassies in the Middle East prompted by an anti-Islam film, would be looking to get involved in a hostage exchange.

Already the Syrian conflict has had a number of spillover effects in Lebanon, including riots and gun battles between supporters and opponents of Assad’s regime, and now the wave of kidnappings.

In contrast to its normally aggressive response to most provocations, however, Hezbollah, which is also deeply involved in Lebanon’s tortuous politics, has tried to downplay the Syrian hostage-taking.

Hezbollah leader Hassan Nasrallah appealed for calm in the wake of the 11 men’s capture and uncharacteristically deferred to the Lebanese government to handle negotiations for their release. He also denied any involvement in the retaliatory kidnappings by Shiite clans.

According to Abu Ibrahim, however, extremist Sunni groups appear to be going in the opposite direction.

While the majority of Syria’s rebels are Sunni and many are religious, most say they disagree with the extreme approach adopted by Sunni jihadists that often involves singling out Syria’s many minorities and the imposition of Islamic law.

“We don’t like the Salafis or extremists,” said Abu Ibrahim, adding that he had little dealings with them, but had yet to come into direct conflict.

“They are only playing a small role in the revolution,” he said, estimating that they made up less than 10 percent of the fighters.