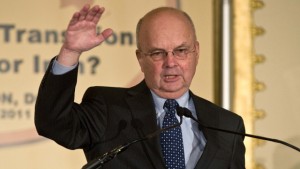 Former CIA director Michael Hayden has told an Israeli newspaper that the Jewish state is not capable of carrying out and sustaining military action against Iran’s nuclear sites without U.S. support, and that there is still time before a decision on any such strike needs to be made.

“I do not underestimate the Israeli talent, but geometry and physics tell us that Iran’s nuclear program would pose a difficult challenge to any military,” Hayden told the widely-circulated Haaretz daily in an interview published Tuesday, adding that, “Israel’s resources are more limited than those of the U.S.”

“There is no absolute certainty that all targets are known,” he told the paper, suggesting that Iran’s alleged efforts to conceal a nuclear weapons program may be outwitting even the world’s most advanced espionage agencies.

He reiterated previous comments by American officials who have said a single bombing raid would not be able to inflict significant damage on Iran’s heavily-fortified nuclear sites. “They will have to be revisited – which only the U.S. Air Force would be able to do.”

In what amounted to his most dire warning to Israel’s leaders – who have been warned repeatedly for months by Washington against taking unilateral military action – Hayden said any strike on Iran, “will only set the Iranians back some time and actually push them to do that which it is supposed to prevent, getting nuclear weapons.”

Hayden said that from the evidence available, he believes the Iranians will not achieve the capability to begin work on a nuclear weapon until “2013 or 2014,” and thus no decision on military action by either Israel or the U.S. will be needed until then, though he said it was “probably true that the so-called ‘window’ regarding effective action is closing.”

The United Nations nuclear watchdog agency, the IAEA, issued a new report on Iran’s nuclear program last week, which raised concerns about new centrifuges installed at the well-fortified Fordo site, and suspicions that Iran was secretly “scrubbing” the Parchin military complex of evidence – but crucially it found that the Islamic Republic was still far away from obtaining the quantity of high-enriched uranium needed to build a bomb.

Israeli Prime Minister Benjamin Netanyahu, a hardliner who has made it clear his government is running out of patience as Iran continues its nuclear development, called this week for a “clear red line” by the international community, saying Tehran was using the ongoing international divide over the nuclear standoff to “gain time” to continue its work.

“Iran does not see international determination to stop its nuclear project,” Netanyahu lamented to his cabinet.

In spite of the Israeli government’s impatience, the Obama administration – while it has vowed to “have Israel’s back” in the standoff with Iran – is strongly urging Netanyahu to resist a strike, at least until after the U.S. elections in November.

Meanwhile, one of Iran’s most powerful non-state allies, the Islamic militant group Hezbollah, warned that any strike on Iran’s nuclear sites – by Israel or the U.S. – would be met with “huge” retaliation.

“Iran will not forgive a strike against its nuclear facilities,” Nasrallah said in rare live television interview. “The Zionist entity (Israel) will not be the only target. American bases in the region will be targets, too,” he warned, referring to American bases in the Middle East which are in range of Iran’s conventional missiles.

“America takes responsibility for what Israel does,” he told a Lebanese television channel.