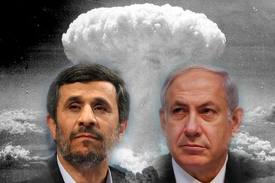 Israel’s prime minister on Sunday urged the international community to get tougher against Iran, saying that without a “clear red line,” Tehran will not halt its nuclear program.

The tough language from Prime Minister Benjamin Netanyahu reflected differences that have emerged between Israel and its allies, particularly the U.S., over how to deal with Iran.

Israel has warned that the Iranians are quickly approaching weapons capability and that the threat of force must be seriously considered. The U.S. says sanctions and international diplomacy must be given more time to work.

Netanyahu, speaking to his Cabinet, said that a new report issued by the U.N. nuclear agency showing progress in the Iranian nuclear program bolstered his claim that international pressure is not working.

“I believe that the truth must be said, the international community is not drawing a clear red line for Iran, and Iran does not see international determination to stop its nuclear program,” Netanyahu said.

“Until Iran sees this clear red line and this determination, it will not stop its advancement of the Iranian nuclear program. Iran must not have a nuclear weapon,” he declared.

Iran says its nuclear program is for peaceful purposes only, a claim that is rejected by the West.

Israel believes a nuclear-armed Iran would pose a mortal threat, citing Iranian calls for Israel’s destruction, its development of missiles capable of striking Israel and its support for anti-Israel militant groups.

Israeli leaders have repeatedly hinted they are growing impatient and could soon be compelled to use force against Iran.

The strain between Washington and its longtime Israeli ally has been on full display in recent weeks, with the U.S. military chief, Gen. Martin Dempsey, twice speaking out against a go-it-alone strike. Last week he said he would “not want to be complicit” in such an assault.

Washington worries that a premature Israeli attack could send global oil prices soaring and touch off a broad conflict possibly drawing in U.S. forces just as the U.S. is preparing to hold presidential elections.

The United States, which has promised Israel it will not allow Iran to go nuclear, has a more powerful air force that gives it a wider window for action.

Given Israel’s more limited military means, many here believe time is running out. Last week’s U.N. report has only reinforced that view.

The report concluded that Iran has expanded its nuclear activity at a heavily fortified underground site and effectively shut down inspections of a separate site suspected of being used for weapons-related experiments.

“The report confirms what I have been saying for a long time – the international sanctions are burdening Iran’s economy, but they are not delaying the development of the Iranian nuclear program,” Netanyahu said.