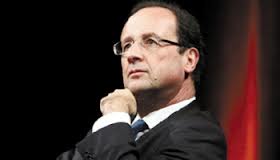 France will recognize a provisional Syrian government as soon as it has been formed, President François Hollande said on Monday, urging Syria’s fractured political opposition to establish one as soon as possible.

Mr. Hollande also said that France, like the United States and Britain, would view any use of chemical weapons by President Bashar al-Assad of Syria as a legitimate justification for military intervention, even without a United Nations Security Council resolution.

“With our partners we remain very vigilant regarding preventing the use of chemical weapons, which for the international community would be a legitimate reason for direct intervention,” Mr. Hollande said during an annual foreign policy speech to French ambassadors, his first as president.

The statements by Mr. Hollande represented the most forceful attempt by the group of Western nations calling for Mr. Assad’s ouster to nudge Syria’s marginalized and often squabbling opposition groupings toward unity.

Despite repeated attempts, those groups, which include many exiled figures, have failed to agree on a common approach to ending Mr. Assad’s rule, or to gain credibility, especially with Syrians inside the country. As the violence reaches deadlier peaks, attention has shifted to armed rebel groups, which have become the most prominent face of a rebellion that started almost 18 months ago with street protests.

The French leader also reiterated a warning made by President Obama a week ago, seconded a few days later by Prime Minister David Cameron of Britain, that military intervention could be justified if the Syrian government used unconventional weapons or moved them in a threatening fashion. Syria has said that it would use such weapons only in the event of an external attack.

Mr. Hollande also confirmed that France was working with other countries on the possibility of establishing “buffer zones” inside Syria, presumably if the opposition forces can create them. The zones, formally to protect refugees, were an idea floated by Turkey, which has resisted suggestions that it use its own forces to invade Syria and create such zones for the Free Syrian Army and other rebels.

The French defense minister, Jean-Yves Le Drian, has already spoken of possible “no-fly zones” over Syrian territory, from the Turkish border to Aleppo, to protect refugees, but he has provided no further details. He said the idea originated with Secretary of State Hillary Rodham Clinton and was being studied.

Mr. Hollande also said that France continued to press the Security Council for a new, more far-reaching resolution on Syria and criticized Russia and China for using their vetoes to protect Mr. Assad. He said that their “attitude is weakening our capacity to ensure the United Nations Charter is respected.”

His comments came as some of the war’s deadliest violence remained focused on the outskirts of Damascus. In Daraya, southwest of the capital, opposition activists have accused the government of killing hundreds of people over the last week.

In recent days, residents have spoken of a brutal “cleansing” operation by the military, deploying helicopters, heavy artillery and tanks to dislodge a large contingent of rebel fighters who had made Daraya a stronghold. Mass burials were held on Sunday for victims, who included women and children.

Refugees from Daraya who reached Lebanon on Monday spoke of bodies lying on residential streets and town squares, and a city choked by the smell of death. A 17-year-old refugee who fled with her family said that many of the dead were rebel fighters, but many other victims, like her uncle, who she claimed had no ties to the rebels, were civilians seized by government troops who later turned up dead, she said.

Her uncle, a 40-year-old bus driver, was taken by soldiers last Monday as he walked neighbors to a bomb shelter, she said. The next day, his body was found with knife and bullet wounds. His family, too frightened to attend his funeral, found a picture of his corpse on the Internet. Now his niece keeps the picture on her cellphone.

Also on Monday, Syrian antigovernment fighters said they had brought down a government helicopter during fighting in the eastern suburbs of Damascus. Syrian state television confirmed that a helicopter had crashed in the neighborhood of Qaboun, without detailing the cause.

In an unverified video on the Internet on Monday purporting to show the crash, flames appear around a falling helicopter before it bursts into a fireball and plummets. Another video appeared to show charred wreckage.

On the Syrian border with Turkey, a backup of Syrians trying to flee appeared to be growing quickly, with nearly 10,000 awaiting permission to cross, a Turkish government official reported. “There are people sleeping literally on the roadsides,” said the official, who spoke on condition of anonymity.

Turkey has already taken in more than 80,000 Syrians who have registered with the United Nations refugee agency. Turkey has built nine camps to accommodate them and is scrambling to construct six more, while temporarily housing 19,000 Syrians in student hostels until the new camps are completed.

The Turks have said they are prepared to accommodate a maximum of 100,000 Syrians, and it remains unclear what the Turkish government will do when that limit is reached.

The number of Syrians who have fled to Turkey, Iraq, Jordan and Lebanon has surged in recent weeks and now exceeds 200,000, outpacing estimates by international relief agencies.

In a further sign of stress in the relief effort, Unicef issued an urgent appeal on Monday for additional funds to meet needs at the Za’atari refugee camp in Jordan near the Syrian border. At least half the population of the camp’s 17,000 people are children.