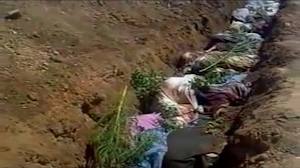 Abu Qais, a Sunni Muslim in Syria’s capital Damascus, says six members of his extended family have been killed by gunmen who belong to the minority Alawite sect of President Bashar Assad.

The gunmen who grabbed one of his distant cousins called up his family while they were torturing him “so they could hear his screams,” said Abu Qais, an anti-Assad activist who spoke on condition his full name not be used for fear of reprisals.

Sectarian slayings between Syria’s Sunni majority and the Alawite minority have been a brutal reality of Syria’s 17-month-old conflict, and they have only accelerated as the country falls into outright civil war. Sunnis have largely backed the uprising against Assad’s rule, while the Alawites — members of an offshoot of Shiism — have firmly stood behind the regime, where they fill the leadership ranks.

And as tit-for-tat killings have swelled, so has the segregation of the two communities as they flee each other. In Damascus and other cities, Sunnis and Alawites avoid venturing into each other’s neighborhoods for fear of being snatched. Some Alawite districts in the capital are now ringed with checkpoints manned not only by security forces but also residents who have taken up arms to protect their homes.

Those in mixed neighborhoods flee their homes to move into safer enclaves dominated by their community — whether in the same city or in another part of the country.

“Mutual threats in Damascus have succeeded in triggering migration,” said Fateh Jamous, an Alawite activist from Latakia, the Mediterranean coastal city where many Alawites have fled. Latakia itself has so far represented a sort of tense neutral ground — its population is about half Sunni, half Alawite. “That created a sort of balance of terror. So far, it has been generally peaceful,” he said by telephone from Latakia.

The flight raises the grim possibility that Syria could go down the path of neighboring Iraq. There, violence in 2006 and 2007 effectively turned into a sort of sectarian cleansing, as Shiite and Sunni militias and insurgents targeted members of the rival community, killing thousands and sending hundreds of thousands fleeing their homes. To this day, Baghdad remains largely divided between wholly Shiite and wholly Sunni districts with few mixed areas remaining.

Syria has not yet reached that scale. But the prospect of it breaking up along religious or ethnic lines is no longer a remote possibility in a conflict that activists estimate has killed 20,000 people as Assad’s regime tries to crush rebels determined to topple him. Kurds in the northeast have begun rumbling with talk of self-rule. Alawites have been pulling back into their ancestral heartland, along the Mediterranean coast and in the nearby mountains.

Some anti-regime activists believe that two reported massacres of Sunnis earlier this year, in the towns of Houla in May and Qubeir in June, aimed to drive Sunnis out of areas near main routes to the coast to ensure control of the Alawite enclave.

But the tearing apart of the two communities has been taking place on a smaller but increasing scale, neighborhood by neighborhood and city by city.

Their coexistence has always been uneasy. Sunnis make up the vast majority of Syria’s 23 million people, and Alawites about 15 percent of the population. For the past 40 years, the Assad family’s regime has enforced a secular ideology that zealously marketed the notion of equality among the nation’s many religious and ethnic groups.

But at the same time, it was promoting the Alawite community to which the Assad family belongs.

Alawites, who had traditionally been among the poorest in Syria, were brought in by the Assads to fill the regime’s leadership, elevating them into an elite class that had historically been Sunni. Top positions in the army, police and security agencies were given to Alawite men, while their women typically worked in the government. Significantly, inter-marriages between Sunnis and Alawites have been rare, though Assad himself is married to a British-raised Sunni who hails from the central city of Homs.

In Damascus’ mostly Sunni neighborhood of Mazzeh, a resident named Moaz nostalgically remembers the woods that once stood on a hill close to his home. Then, years ago, the trees were cut down, and apartment blocs went up to house Alawites taking positions in the military and government. Their area, built within the Mazzeh area to promote an image of integration, became known as Mazzeh-86.

“Our relation with them was like a cold peace, ‘We mind our own business and you mind yours’,” recalled Moaz, a 28-year-old anti-Assad activist. He spoke on condition his full name not be used to protect himself and his family from reprisals.

Now the two areas are virtually at war. Alawites from Mazzeh-86 frequently help put down protests by Sunnis in the larger district, beating up protesters outside mosques alongside security forces. Checkpoints divide the two areas. In Sunni Mazzeh, there have been numerous slayings of those believed to be informers for the government, both Alawites and Sunnis, said Moaz.

“People with coastal accents (Alawites) are instantly recognized. They are arrogant and sure of themselves,” he said.

Damascus had been largely unaffected by the fighting raging elsewhere in the country, until last month when rebels staged a major offensive in the city of 1.7 million people, sparking a heavy regime counter-attack. As the fighting raged, sectarian violence increased. So far, it has been concentrated in poor or lower middle-class neighborhoods of the capital, while most upscale districts remain peaceful, residents and activists say.

Alawites, who by some estimates make up 30 percent of Damascus’ residents, have fled neighborhoods where they make up a small minority, finding relative security elsewhere where Alawite numbers are higher, residents and activists say. Many Alawite men send their families to their home villages near the coast.

“Most Alawites are in this with the view that it is a life or death war for them,” said another Damascus resident by Skype. Identifying himself only as a “native Syrian” — refusing to give his sectarian allegiance — he said checkpoints outside Alawite neighborhoods have been beefed up in recent weeks, with up to 15 or 20 heavily armed security men and residents staffing them.

“The Alawites think that they would be subjected to genocide if Assad goes,” he said.

Sectarian violence has been rampant in Homs, a major center of the revolt that was subjected to a devastating government siege earlier this year. Residents and activists say its population has been effectively divided into two sections, with Sunnis in one side and Alawites and Christians in the other.

Mohammed Saleh, a Homs resident and a rare Alawite who actively works with the opposition, says several months ago two Sunni men showed up at his apartment and ordered him to pack up and leave in 10 days.

“I made calls. I spoke to many of my friends and contacts in Homs and elsewhere. I was able to stay,” Saleh, reached by telephone in Homs, said. But Saleh’s son, who had been living with him, left with his wife and kids to an Alawite part of the city.

“I am never leaving,” said Saleh, a trained chemist now making a living selling solar energy systems for household use, in huge demand because of lengthy power cuts. His work takes him across the entire city, but he never travels alone. “I make a point of taking with me someone from the neighborhood I am going to. Even if it is an Alawite district, I still go with a resident from there.”

Some of Saleh’s closest friends and neighbors have not been so lucky.

“In December and January alone, I lost a friend who was a Sunni doctor, another who was a Shiite engineer and a third one who was an Alawite army officer,” said Saleh.