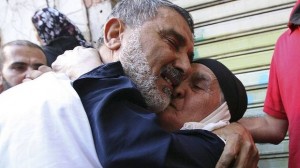 SYRIAN rebels have freed one of 11 Lebanese Shiite pilgrims they have been holding for three months, in a move aimed at easing cross-border tensions after a wave of abductions of Syrian citizens in Lebanon.

Hussein Ali Omar, 60, appeared healthy in an interview aired on Qatar’s al-Jazeera TV as he crossed into Turkey after his release. He later arrived in Beirut aboard a private Turkish jet.

”Our treatment [by the Syrian captors] was excellent and the Lebanese [hostages] are well,” Mr Omar said.

The release came a week after Lebanese tribesmen kidnapped two Turks and more than 20 Syrians to force the rebels to release Lebanese citizen Hassane al-Mikdad, whom the rebels captured near Damascus and accused of being a member of Lebanon’s militant Hezbollah group. The al-Mikdad clan later released all but four of the Syrians it was holding.

Mohammed Nour, a rebel spokesman in the northern Syrian town of Azaz, did not say what they would do with the remaining 10 pilgrims.