Many of the victims in Syria strikes are children, Amnesty 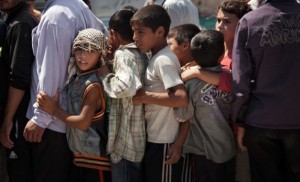 Amnesty International said a 10-day visit to the embattled Syrian city of Aleppo found that many of the victims of government air and artillery strikes have been children, and others were waiting in long lines outside bakeries to buy scarce bread.

“The use of imprecise weapons, such as unguided bombs, artillery shells and mortars by government forces has dramatically increased the danger for civilians,” Donatella Rovera, an Amnesty International senior crisis response adviser who recently returned from Aleppo, Syria’s most populous city, said today in a press release accompanying a report by the London-based human-rights group.

“The overwhelming majority of victims were killed in air strikes and artillery attacks by government forces,” although in some cases the source of an attack was unclear, the group said.

“Opposition fighters, while mostly fighting with short- range light weapons, have at times also used imprecise or indiscriminate weapons (such as mortars and home-made rockets) that equally pose a danger to civilians,” it said.

The report also highlights what Amnesty called a “sharp increase in extrajudicial and summary executions of civilians not involved in the conflict” by Syrian President Bashar al- Assad’s forces. “Bodies of mostly young men, usually handcuffed and shot in the head, have been frequently found dumped near the headquarters of the Air Force Intelligence which is completely controlled by government forces,” according to the group.

“As with Hollande, the Prime Minister and Obama discussed how to build on the support already given to the opposition to end the appalling violence in Syria and bring about stability,” according to the statement. “Both said that they wanted to see a credible opposition and hoped that the opposition would use their upcoming meeting in Cairo to show real unity of purpose and coherence in working towards transition.”

Cameron and Hollande also “agreed that France and the U.K. would work more closely to identify how they could bolster the opposition and help a potential transitional Syrian government after the inevitable fall of Assad,” Cameron’s office said.

Lebanon’s Prime Minister Najib Mikati yesterday urged national unity to insulate his country from “the burning fires all around it,” after gun battles in his hometown of Tripoli.

Mikati expressed concern over “attempts to involve Lebanon more and more” in the conflict in Syria, according to his website. All parties should consider themselves responsible for the “bloody events in Tripoli” and the “consequences resulting from killing, destruction and bloodshed that will not only impact the city but Lebanon as a whole,” he said.

The remarks came a day after seven people were killed and more than 70 wounded in Tripoli in fighting between supporters and opponents of Syria’s Assad, the latest sign that the violence in Syria is spilling into its neighbor.

The official National News Agency said yesterday that a cease-fire agreement in Tripoli was reached after a meeting of clerics, lawmakers and leaders of armed groups, and will go into effect at 5 p.m.

Lebanon’s army urged the country’s leaders to refrain from “inflaming” the differences among the parties and using the “tense regional situation to settle internal scores.”

Photo: In this Wednesday, Aug. 15, 2012 photo, Syrian children line up to wait their turn to buy bread, outside a bakery shop in the town of Azaz on the outskirts of Aleppo, Syria. Bread and other daily needs have become harder to come by in some areas in Syria. The U.N. humanitarian chief Valerie Amos said Thursday, Aug. 15, 2012, that the humanitarian situation has worsened amid the fighting and that some 2.5 million people in the country are in need of assistance. Photo: Khalil Hamra / AP