Over 3,000 of Syria’s Armenians fled to ancestral homeland 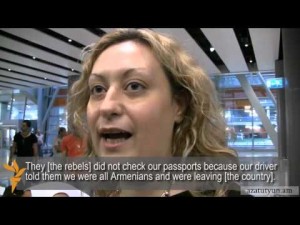 As the passengers from battle-ravaged Aleppo disembarked at Yerevan’s Zvartnots airport, tearful relatives gripped them tightly in emotional embraces.

“Thank God you’ve arrived safe and sound!” one cried out.

Since fighting has gripped the city of Aleppo, where many of Syria’s ethnic Armenian community live, increasing numbers have been fleeing to their ancestral homeland over fears that Christians could suffer if President Bashar al-Assad is ousted and replaced by an Islamic regime.

Among those arriving in Yerevan was Yenok Sulahian, who said that many Syrian Armenians had started to plan their escape when the first clashes began breaking out between rebels and government forces in Aleppo a month ago.

“Shooting and bomb blasts could be heard at night. The government was warning us all the time not to leave home to avoid being shot,” he said.

The diaspora ministry in Yerevan said more than 3,000 Syrian Armenians have arrived since March 2011, when the government began a brutal crackdown on peaceful anti-regime protests across the country that has since descended into full-blown conflict between government forces and opposition fighters.

The national airline Armavia has been laying on additional flights to carry those seeking to flee.

The Armenian community in Syria may be small – between 60,000 and 100,000 people according to estimates – but its tragic history has added to its sense of unease.

Armenians in Syria are descendants of those who took refuge there after escaping the genocide of Armenians in Ottoman Turkey during World War I. They are long-established Syrian citizens, many with their own businesses.

Now they said they face uncertainty, not knowing how the conflict will end nor what the future will be for ethnic minorities under a new regime.

Some worry that they could face fresh persecution if Assad’s government, which has maintained friendly relations with the authorities in Yerevan, is replaced by an Islamic regime.

“The Armenian community has taken a neutral position – we call it pro-Syrian,” said an elderly woman arriving at Zvartnots from Aleppo who declined to give her name.

“Of course this uncertainty is very scary – what will the outcome of this be and what will happen to the Christian minority if Assad goes?” she said.

However many of them, like Sulahian, said they want to go home as soon as there is peace.

“If everything is all right, we plan to return to Aleppo for the children to go to school,” he said hopefully.

Since the conflict began, Armenian authorities have taken measures to make it easier for the Syrian Armenians to return, easing the visa process and allowing those who want to apply for citizenship to do so at the consulate in Aleppo, rather than in Yerevan.

“So far we cannot call this process mass migration. Many Armenians do not want to leave their homes and their businesses,” said Firdus Zakarian, an official at the diaspora ministry’s commission for Syrian-Armenian issues.

More than 3,000 Syrian Armenians have applied for citizenship in the past six months however – a sign of growing uncertainty about their future in Syria.

Over 400 children are also being flown from Syria to Armenia for holidays in summer camps, initially for two weeks but potentially for a longer period if the crisis continues.

The diaspora ministry insists that the situation is not yet critical and that no mass evacuation is being planned.

“Today in Syria there is no anti-Armenian hysteria and no real threat to the existence of the long-standing Armenian community,” Zakarian said.

But a nation whose memories of bloody ethnic purges remain fresh is understandably concerned about the future of its kin as the battle for control over Syria rages on.

“We are considering every scenario and if, God forbid, the situation does become critical, Armenia is ready to assist all our compatriots,” Zakarian said.