Israel may attack Iran as early as October

With reports of probable attack by Israel on nuclear installations of Iran, the battle for psychological ascendancy between the Iran-Syria-Hezbollah alliance and Israel has escalated sharply on Friday just gone by. While supporting Iran, Hezbollah’s Secretary General Sayyed Hassan Nasrallah threatened bluntly to retaliate by massive missile strikes deep inside Israel in case it attacked on Iran. Invoking imagery possibly resulting from counter-strikes against Israel’s nuclear facilities, Mr. Narsallah said that retaliation by his battle hardened organisation would kill thousands and make life “hell” inside the country. Continuing with his tirade against Israel, he said: “I tell the Israelis that you have a number of targets, not a large number… that can be hit with precision rockets… which we have.”

In fact, Nasrallah’s such threat follows because of Israeli Prime Minister Benjamin Netanyahu and Defence Minister Ehud Barak along with influential sections of the country are, now, reported to be forcefully advocating a war against Iran despite strong opposition from the military generals, security experts and prominent personalities of Israeli administration. According to a British news-paper, ‘The Sun’, the Israeli military hopes to attack- by the end of October or in the beginning of November this year- on a confidential uranium processing centre in Iran known as Fordo plant about which Iran had never disclosed to the West. It was only in September, 2009 that the western intelligence agencies could know about this plant, thereby, further escalating the already tense relations between Iran and the west including Israel.

Further, as per British reports, this time Israel is ready to attack Iran even with-out American support as it (America) is busy in its Presidential elections. The Israeli forces are reported to be seen in the deserts of Iraq, giving rise to the suspicion of making foundation for themselves for any likely ground attacks on Iran. But such possibility is quite remote as no sovereign country has a right to attack on another sovereign country. Consequently, Israel has no right to attack on Iran on grounds of mere suspicions. There are other fora like United Nations, regional fora or global movements like the Non-Aligned Movement whose good offices may be obtained in peaceful resolution of such controversy. 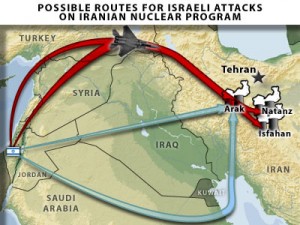 Against this backdrop, although Mr. Nasrallah’s remarks appear to have a more immediate and specific context, yet they do have enough potential of far reaching consequences because this may, on the one hand, aggravate the on-going stand-off between Iran and Israel and added with the continuing turmoil in Syria, will prove to be disastrous for the peace and security of the West Asian region, on the other.