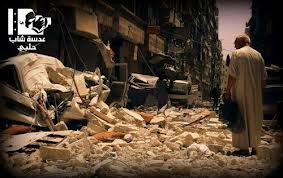 When Syrian forces fired machineguns and rockets on her neighborhood, Um Mohammed prayed for her son — a soldier in the army she fears may kill her.

It was a shock to see the Syrian revolt turn her city of Aleppo into a war zone, she says, but the psychological torment is worse. Every day she faces the reality that her 20-year-old son is part of the army she hopes the rebels will defeat.

“When he calls I tell him: ‘I love you. Please run away. Let yourself be shot before you shoot your own people’,” she says.

Um Mohamed declines to give her son’s name or her family’s last name, fearing for her son’s safety.

The dark rinks under her green eyes reveal sleepless nights. She strokes her 6-year-old daughter’s curls and contemplates her son’s motives for staying. “He says he is at a base in another province and cannot leave. We haven’t seen him for a year.”

Like the country, Um Mohammed’s family has been torn apart by divided loyalties and is suffering the cost of a 17-month-old uprising against President Bashar Assad.

Aleppo, Syria’s commercial hub, became the front line between the army and the rebels three weeks ago. Thousands have fled the country’s largest city of 2.5 million people.

Her husband Ammar, a shoemaker, is running out of money since his workshop closed. They have no fuel and cook on a fire of wood scraps on the roof.

When their son calls, Ammar lies about how they have spent the holy Muslim month of Ramadan.

“He asks if his mother is cooking his favorite meals, I say of course. I don’t tell him really we just had potatoes and rice, or bread. It would break his heart,” he said.

The greying, portly man sits with his family in their crumbling cement block home that squats along one of the dusty, winding back streets on Aleppo’s impoverished outskirts. In a photo, their son looks tall and thin, with a faint smile beneath large brown eyes and wavy hair.

‘This is how it ends’

The family home was just a few streets away from a site of major clashes between rebels and the army. Scorched remains of tanks and bullet cases litter the streets.

As mortars crashed into a rebel hideout down the street, she and her husband took their three smallest children and hid under their bed as shrapnel flew.

“We looked into each other’s eyes and I thought, this is how it ends,” she said.

Six-year-old Mariam, a tiny girl with shocks of curly brown hair, shows off pieces of shrapnel she has collected. She rolls the heavy, jagged chunks of metal across the living room floor, where her family sits on tattered cushions.

Um Mohammed and the children tried to flee the fighting and headed to the countryside. But conditions were so bad some families like hers chose to risk returning to Aleppo instead.

In the country, dozens of people were crammed into a tiny house, with little food or water, and suffocating heat.

“There were sixty of us in my cousin’s house. I thought we might as easily get a disease as we would get hit by a mortar,” she said. “I’d rather starve and be in my own home.”

The fighting has lessened in recent days but it is hard to forget what they survived. A door slam sets eight-year-old Alaa shaking. He is so small he barely reaches his father’s knee.

“I’m not afraid of the shelling,” he insists, then hesitates. “Except at night, then I’m afraid to sleep.”

But even the father, Ammar, struggles with sleep.

“Every night I wonder why the army hasn’t attacked here again. They won’t accept that we have been.