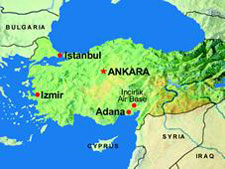 DOHA/DUBAI (Reuters) – Turkey has set up a secret base with allies Saudi Arabia and Qatar to direct vital military and communications aid to Syria’s rebels from a city near the border, Gulf sources have told Reuters.

News of the clandestine Middle East-run “nerve centre” working to topple Syrian President Bashar al-Assad underlines the extent to which Western powers – who played a key role in unseating Muammar Gaddafi in Libya – have avoided military involvement so far in Syria.

“It’s the Turks who are militarily controlling it. Turkey is the main co-ordinator/facilitator. Think of a triangle, with Turkey at the top and Saudi Arabia and Qatar at the bottom,” said a Doha-based source.

“The Americans are very hands-off on this. U.S. intel(ligence) are working through middlemen. Middlemen are controlling access to weapons and routes.”

The centre in Adana, a city in southern Turkey about 100 km (60 miles) from the Syrian border, was set up after Saudi Deputy Foreign Minister Prince Abdulaziz bin Abdullah al-Saud visited Turkey and requested it, a source in the Gulf said. The Turks liked the idea of having the base in Adana so that they could supervise its operations, he added.

A Saudi foreign ministry official was not immediately available to comment on the operation.

Adana is home to Incirlik, a large Turkish/U.S. air force base which Washington has used in the past for reconnaissance and military logistics operations. It was not clear from the sources whether the anti-Syrian “nerve centre” was located inside Incirlik base or in the city of Adana.

Qatar, the tiny gas-rich Gulf state which played a leading part in supplying weapons to Libyan rebels, has a key role in directing operations at the Adana base, the sources said. Qatari military intelligence and state security officials are involved.

“All weaponry is Russian. The obvious reason is that these guys (the Syrian rebels) are trained to use Russian weapons, also because the Americans don’t want their hands on it. All weapons are from the black market. The other way they get weapons is to steal them from the Syrian army. They raid weapons stores.”

The source added: “The Turks have been desperate to improve their weak surveillance, and have been begging Washington for drones and surveillance.” The pleas appear to have failed. “So they have hired some private guys come do the job.”

President Barack Obama has so far preferred to use diplomatic means to try to oust Assad, although Secretary of State Hillary Clinton signalled this week that Washington plans to step up help to the rebels.

Reuters has established that Obama’s aides have drafted a resolution which would authorise greater covert assistance to the rebels but still stop short of arming them.

The White House’s wariness is shared by other Western powers. It reflects concerns about what might follow Assad in Syria and about the substantial presence of anti-Western Islamists and jihadi fighters among the rebels.

The presence of the secret Middle East-run “nerve centre” may explain how the Syrian rebels, a rag-tag assortment of ill-armed and poorly organised groups, have pulled off major strikes such as the devastating bomb attack on July 18 which killed at least four key Assad aides including the defence minister.

A Turkish diplomat in the region insisted however that his country played no part in the Damascus bombing.

“That’s out of the question,” he said. “The Syrian minister of information blamed Turkey and other countries for the killing. Turkey doesn’t do such things. We are not a terrorist country. Turkey condemns such attacks.”

However, two former senior U.S. security officials said that Turkey has been playing an increasing role in sheltering and training Syrian rebels who have crossed into its territory.

One of the former officials, who is also an adviser to a government in the region, told Reuters that 20 former Syrian generals are now based in Turkey, from where they are helping shape the rebel forces. Israel believes up to 20,000 Syrian troops may now have defected to the opposition.

Former officials said there is reason to believe the Turks stepped up their support for anti-Assad forces after Syria shot down a Turkish plane which had made several passes over border areas.

Sources in Qatar said the Gulf state is providing training and supplies to the Syrian rebels.

“The Qataris mobilized their special forces team two weeks ago. Their remit is to train and help logistically, not to fight,” said a Doha-based source with ties to the FSA.

The United States, Israel, France and Britain – traditionally key players in the Middle East – have avoided getting involved so far, largely because they see little chance of a “good outcome” in Syria.

A former U.S. official who advises a government in the region and other current and former U.S. and European security officials say that there has been little to zero direct assistance or training from the U.S. or its European allies.

The former official also said that few sophisticated weapons such as shoulder-fired bazookas for destroying tanks or surface-to-air missiles have reached the anti-Assad forces.

While some Gulf officials and conservative American politicians have privately suggested that a supply of surface-to-air missiles would help anti-Assad forces bring the conflict to a close, officials familiar with U.S. policy say they are anxious to keep such weapons out of the hands of Syrian rebels. They fear such weapons could make their way to pro-jihad militants who could use them against Western aircraft.

The CIA and the Israelis’ main concern so far has been that elements of al-Qaeda may attempt to infiltrate the rebels and acquire some of Syria’s stockpile of chemical weapons.

Sima Shine, a former chief Mossad analyst who now serves as an adviser to the Israeli government, told Reuters: “It’s a nightmare for the international community, and chiefly the Americans – weapons of mass-destruction falling into the hands of terrorists. In parallel to its foreign contacts, Israel is taking this especially seriously. After all, we are here, and the Americans are over there.”

She envisaged two circumstances under which Hezbollah, the Lebanese Islamist group, could obtain some of the chemical weapons stockpile.

“Assad goes and anarchy ensues, during which Hezbollah gets its hands on the weapons. There is a significant Hezbollah presence in Syria and they are well-ensconced in the military and other national agencies. So they are close enough to make a grab for it.

“Another possibility is that Assad, knowing that he is on his way out, will authorised a handover to Hezbollah, as a message to the world about the price of encouraging his ouster.”

However, British and U.S. officials believe there is little or no sign of Assad being toppled imminently.

The situation, one senior European official said, is still likely to veer back and forth, like a tug-of-war between pro- and anti-Assad forces.

There is no indication, the official added, that Assad himself has any intention of doing anything but fighting on until the bitter end.