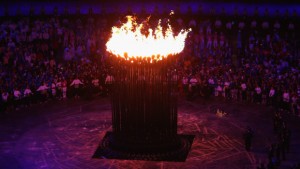 The 2012 London Olympics opened in spectacular fashion Friday night when, after a star-studded show, seven unknown teenage athletes lit the Olympic cauldron that will burn for the duration of the games.

Seen by millions around the world, the high-octane, musical celebration of British history and culture rolled to the rock of the Beatles, the Stones and The Who. It was inspired by Shakespeare’s “The Tempest” and spliced together by director Danny Boyle.

The highlight of the Oscar-winning director’s $42 million show was pure movie magic, using film tricks to make it seem as if Britain’s beloved 86-year-old Queen Elizabeth II had parachuted into the stadium with the nation’s most famous spy – Daniel Craig as 007.

Boyle turned the stadium into a giant juke box, with a nonstop rock and pop homage to cool Britannia that ensured the show never caught its breath.

The high-adrenaline soundtrack veered from classical to irreverent. Boyle daringly included the Sex Pistols’ “Pretty Vacant” and a snippet of its version of “God Save the Queen” an anti-establishment punk anthem once banned by the BBC.

The encyclopedic review of modern British music continued with a 1918 Broadway standard adopted by the West Ham football team, the Rolling Stones’ “(I Can’t Get No) Satisfaction” and “Bohemian Rhapsody,'” by still another Queen, and other tracks too numerous to mention, but not to dance to.

The evening started with fighter jets streaming red, white and blue smoke and roaring over the stadium, packed with a buzzing crowd of 60,000 people, at 8:12 p.m. or 20:12 in the 24-hour time observed by Britons.

Boyle, one of Britain’s most successful filmmakers, who directed “Slumdog Millionaire” and “Trainspotting,” had a ball with his favored medium, mixing filmed passages with live action in the stadium to hypnotic effect, with 15,000 volunteers taking part in the show.

Actor Rowan Atkinson as “Mr. Bean” provided laughs, shown dreaming that he was appearing in “Chariots of Fire,” the inspiring story of a Scotsman and an Englishman at the 1924 Paris Games.

Opening the ceremony, children popped balloons with each number from 10 to 1, leading a countdown that climaxed with Bradley Wiggins, the newly crowned Tour de France champion.

Wearing his yellow winner’s jersey, Wiggins rang a 23-ton Olympic Bell from the same London foundry that made Big Ben and Philadelphia’s Liberty Bell. Its thunderous chime was a nod to the British tradition of pealing bells to celebrate the end of war and the crowning of kings and queens.

The parade of nations featured most of the roughly 10,500 athletes marching behind the flags of the 204 nations taking part.

Greece had the lead, as the spiritual home of the games, and Team Great Britain was last, as host.

As they marched around the stadium, music from the Bee Gees played in the background.

Jamaica’s Usain Bolt, the world’s fastest man, strode confidently with his nation’s flag while playing up to cameras and cheering fans.

Prince William and his wife, Kate, joined in thunderous applause that greeted the British team, which marched to the David Bowie track “Heroes.”

Both Bahrain and Brunei featured female flagbearers in what has been called the Olympics’ Year of the Woman. For the first time at the games, each national delegation includes women, and a record 45 percent of the athletes are women. Three Saudi women marching behind the men in their delegation flashed victory signs with their fingers.

Former world heavyweight champion and 1960 Rome Olympic gold medalist Muhammad Ali was cheered when he appeared briefly with his wife, Lonnie, before the Olympic flag was unfurled.