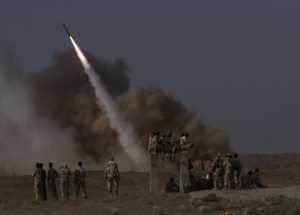 Iran said on Tuesday it had successfully tested medium-range missiles capable of hitting Israel in response to threats of military action against the country, Iranian media reported.

Israel says it could attack Iran if diplomacy fails to force it to halt its disputed nuclear energy program. The United States also has military force on the table as a last resort, but U.S. officials have repeatedly encouraged the Israelis to be patient while new sanctions against Iran take effect.

The Islamic Republic announced the “Great Prophet 7” missile exercise on Sunday after a European Union embargo against Iranian crude oil purchases took full effect after another fruitless round of big powers talks with Tehran.

Iran’s official English-language Press TV said the Shahab 3 missile with a range of 1,300 km – able to reach Israel – were tested along with the shorter-range Shahab 1 and 2.

“The main aim of this drill is to demonstrate the Iranian nation’s political resolve to defend vital values and national interests,” Revolutionary Guards Deputy Commander Hossein Salami was quoted by Press TV as saying.

He said the tests were in response to Iran’s enemies who talk of a “military option being on the table”. “The maneuvers are an answer to the rude words spoken against Iran,” Fars news agency quoted him as saying.

Fars said dozens of missiles had been aimed as simulated air bases and that Iranian-built unmanned drones would be tested on Wednesday. Analysts challenge some of Iran’s military assertions, saying it repeatedly exaggerates its capabilities.

Tehran regularly states its military dominance in the Gulf and has tested nerves across the oil industry, which is concerned by disruption in global crude supplies.

Iran has previously threatened to block the Strait of Hormuz, through which passes more than a third of the world’s seaborne trade, in response to increasingly harsh sanctions imposed by the United States and its allies.

“The message of the … missile maneuvers is that our country with full force is ready to provide security in the Persian gulf region and security for the transit of oil cargo,” said foreign ministry spokesman Ramin Mehmanparast.

The EU embargo aims at pushing Iran to curb uranium enrichment that Western countries say is aimed at developing an atomic weapons capability, an accusation Iran has denied. Tehran says it wants only civilian nuclear energy from enrichment.

On Monday, a group of Iranian parliamentarians proposed a bill calling for country to try to stop oil tankers shipping crude through the Strait of Hormuz to countries that support sanctions against it.

However, the Iranian parliament is relatively weak, analysts say, and the new measure has no chance of becoming law unless sanctioned by Iran’s clerical supreme leader.