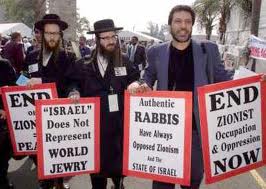 Neturei Karta , which was formally created in Jerusalem in 1938 during the British mandate opposes Zionism and calls for a peaceful dismantling of the State of Israel, in the belief that Jews are forbidden to have their own state until the coming of the Messiah. They live as a part of larger Chareidi communities around the globe.

According to a statement issued by Hezbollah’s press office Qawouk said that “Israel, as a myth, has ended,” adding that the region will not witness stability unless Israel “is gone,” .

“Today, Israel has become a burden on humanity,” he added.

The two rabbis, Dovid Weiss and David Feldman, had arrived in Lebanon to participate in conference on Palestinian issues.

Photo: File photo of rabbis, Dovid Weiss ( C) and David Feldman ( L) during a demonstration against Zionism. Rabbi Weiss is the spokesperson for the Neturei Karta International – Jews against Zionism. He met Iranian president Mahmoud Ahmadinejad in New York during his most recent visit to the UN