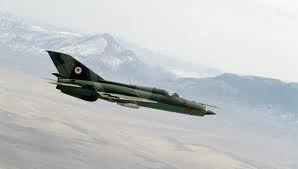 BEIRUT, Lebanon – The pilot of a warplane who had been reported missing by Syrian Air Force authorities during a training mission on Thursday flew to neighboring Jordan where he sought and was granted asylum, Jordanian officials said.

It was the first time since the uprising against President Bashar al-Assad began 16 months ago that a Syrian Air Force officer defected with a commandeered aircraft, and seemed to be a propaganda coup for the rebels seeking his overthrow. Some military analysts in the region said the move set a potentially perilous precedent, raising questions about the cohesiveness of the Air Force. Army defectors have swelled rebel ranks virtually since the earliest days of armed uprising.

Jordan’s information minister, Sameeh Maaytah, said the pilot of the MiG-21 made an emergency landing at a Jordanian military air base and asked for political asylum. After a cabinet meeting, the request was granted, he said.

News reports said the pilot had landed in Mafraq, a northern town near the border with Syria, and the authorities in Damascus had demanded the return of both the pilot and the warplane.

An anti-Assad activist, who spoke on condition of anonymity, said the pilot flew the plane into Jordan after refusing orders to bomb targets in Syria. The source of the activist’s information was not immediately known. The official SANA news agency had earlier quoted an unidentified official as saying the warplane was on a training flight when contact with it was lost in midmorning near Syria’s southern borders. The pilot was identified as Col. Hassan al-Mirei Hamadeh.

The MiG-21 is a Soviet-era warplane supplied to many of Moscow’s allies.

In a sign of the continued severity of fighting on the ground, the International Committee of the Red Cross said a convoy trying to reach the old city in Homs, in western Syria, was forced by gunfire to turn back on Thursday, Reuters reported. Relief workers in the convoy from both the Red Cross and the Red Crescent have been seeking “to evacuate persons wounded and sick, women and children,” a Red Cross spokesman in Geneva said.

President Assad’s air force is one of the largest in the Middle East, with nearly 500 warplanes, nearly 200 training aircraft and nearly 200 helicopters, according to a tally compiled by the International Institute for Strategic Studies, a London-based research group.

In the conflict with armed rebels, Syria’s government had avoided using the air force until recent weeks, fearing its deployment might prompt Western calls for a no-fly zone. The authorities were also reluctant to give the impression that they had lost control on the ground, analysts said.

Most pilots in the Syrian Air Force belong to the country’s Sunni Muslim majority, who also form the backbone of the resistance, and there were fears that some of them might defect.

But this spring the use of the Air Force was increased, particularly helicopters to attack rebel holdouts and to counter improvements in the rebels’ limited firepower. A retired Lebanese officer, Gen. Elias Hanna, an expert on Syria military capabilities, said that while most pilots were Sunnis, their commanders were from the minority Alawites who have provided the power-base of the ruling Assad family for the past four decades. President Assad’s own father, Hafez al-Assad, who died 12 years ago, had himself been an Air Force officer.

In a telephone interview, General Hanna called the reported defection “a psychological blow to the regime” since Damascus “had started losing his grip on the armed forces and now it’s losing its grip on the Air Force.

“This signals the erosion of the regime’s capacity to use all its forces, the idea of sending planes is no longer an option, neither against an internal or an external enemy,” General Hanna said. Syria’s biggest arms supplier is Russia, whose chief arms exporter said last week that Moscow was shipping advanced defensive missile systems to Syria that could be used to shoot down airplanes or sink ships if the United States or other nations try to intervene to halt the violence.

His remarks came days after Secretary of State Hillary Rodham Clinton raised diplomatic pressure on Russia by criticizing the Kremlin for sending attack helicopters to Damascus.

Elsewhere, the deputy head of the Arab League on Thursday put pressure on Russia to cut off assistance to the Syrian military, saying Moscow is “helping to kill people,” and called for revisions to the United Nations cease-fire agreement in Syria, which has failed to halt the fighting.

The messages were delivered in an interview with the league’s deputy general secretary, Ahmed Ben Hilli, with the Interfax news service, and seemed to convey a new overture.

The statement comes ahead of a planned visit to Moscow by the Arab League’s general secretary, Nabil el-Araby.

“I can say that any assistance in violence should be stopped, because when you supply military equipment, you are helping to kill people,” Mr. Ben Hilli said. “This must be stopped.”