How About a Plan C for Syria ?

by yalibnan
1008
The longer it takes for the Obama administration to drop the "why we can't" and embrace a "yes we can" to a new, more robust Syrian policy, the more likely there will be NO plan
Share: 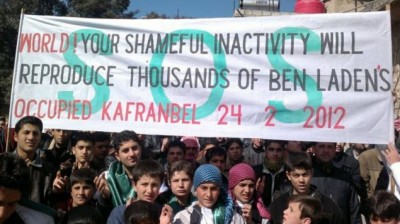 The White House is ever so reluctantly realizing that subcontracting out its Syria policy when the looming crisis demands mature, steady, imaginative, and alibi-avoiding strategies is doing more harm than good to everyone involved, except Mr. Assad. Administration officials keep gravitating to the simplistic assertion that when it comes to Syria, there is no Plan B since Plan B may compel direct U.S. military intervention.

Yep, there can be no Plan B when the administration resists having to come up with one. But I can drive a ten-wheeler between existing U.S. policy and putting boots on Syrian ground. I call that Plan C.

How did the U.S. get to the point where the White House has taken most options off the table, even those that minimize the risk of overt military involvement against Syria?

When the mayhem, murders and massacres were already numbering in the thousands, the administration’s policy could best be characterized as a “punt” in football parlance. Now, in the wake of the Houla massacre of women and children at the hands of Assad’s henchmen, U.S. policy is little more than a “Hail Mary!”

The Syrian people deserve better from us. And the American people deserve a policy that befits our nation’s global aspirations and its long-term strategic goals in the Middle East; not election-year “making it up as events dictate” ad hoc-itis.

Even before the oxymoronic April 10 U.N. Kofi Annan “cease fire” the U.S. first punted to the Arab League in the hope that the real League powers: namely Saudi Arabia and Qatar, would find ways to reign in Assad’s “kill ’em all” instincts in the name of fraternal Arab relations. No dice. Assad kept up the massacres.

When that failed, the U.S. then turned to Turkey, urging Ankara to take the lead on Syria. After all, Turkey had invested mightily in building a relationship with Assad, and when Assad breached that trust, Ankara started turning the screws. Turkey began shielding the nascent Free Syrian Army and provided safe haven to the thousands of Syrian civilians seeking refuge inside Turkey. Ankara also provided a base for the nascent Syrian National Council. It looked like Turkey was beginning to exert real leadership that would accord the U.S. a safe haven for its Syria “punt’ policy.

But when the Turks, and their Arab League allies decided that it was time to get really tough on Syria by implementing a plan to create humanitarian corridors, provide financial support, and covert lethal assistance from Libya that Qatar would retransfer back via Turkey, the White House developed a bad case of diplomatic cold feet, afraid that unleashing the Turks and the Arab League against Syria would compel the U.S. to be dragged into the conflict if anything went wrong.

Meanwhile, the death toll had exceeded 10,000 (let alone the tens of thousands of innocent Syrians injured or tortured by this thuggish dictatorship of a deplorable regime.

After the White House pulled the rug out from Turkey and Saudi Arabia it threw its lot in with Kofi Annan’s utterly naïve six point peace plan. The U.S. was not naïve about Assad’s intentions (certain he would use the cover of U.N. peacekeepers to continue the massacres). But even the White House was caught off guard by Assad’s brazen suffocation of Annan’s peace baby in the crib.

Then, the White House came up with another gambit. It would toss the Syrian hot potato to the Russians. The very Russians who on one hand were feigning support for a U.N. peace plan, while pouring in guns and ammunition into Assad’s hands to keep him fully loaded. Always harkening backwards to gravitate to what either succeeded or failed, the Obama team began leaking to the media that it would seek to convince the Russians to join in a “Yemen” style solution whereby Assad (like his Yemeni counterpart) would excruciatingly slowly yield power.

Let’s be real. If Assad were looking for a graceful exit he wouldn’t be wantonly massacring women and children. So much for having the Russians pulling the plug on their Alouite protégé.

So what is a better Plan C if the White House has run out of any Plan B’s?

First, Moscow simply cannot have it both ways. It has to be called out internationally for continuing to resupply Assad’s armed forces under the cover of a peace plan it claims to be supporting. Even if the Russians veto it, the U.S. should be pushing for a U.N. Security Council resolution demanding that all countries cease providing arms to the combatants and dare Moscow (or China) to veto it. Russia has avoided the real wrath it deserves from the court of world public opinion and from Arab nations for fueling the violence in Syria. It is engaged in the diplomatic equivalent of felony murder by enabling Assad to violate the U.N. Security Council’s unanimously approved plan. 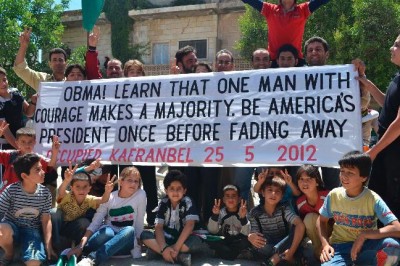 Two, the Houla massacre was not the first straw, nor it will be the last straw. The European Union should file appropriate papers before the International Criminal Court accusing Assad and his immediate siblings of crimes against humanity. Delegitimizing this regime is a crucial step and it is lame for the administration to assert that by doing so it undercuts a “Yemen”-type solution which is not in the cards.

Three, it’s time for a “Kofi Break” and send the Neville Chamberlin-wannabe former SecGen back to his rocking chair. The fact that the clueless Annan was found in Damascus today smiling warmly and shaking hands with Assad who was serially violating a U.N. ceasefire and who had just likely ordered his troops to commit the Houla massacre evidences what a catastrophe his stewardship has been. The vainglorious Annan will never concede Assad outsmarted him. Annan, like many another meek, milquetoast, diplomat before him, is out gunned and out of his league. Most importantly, he is out of credibility. There are plenty of other diplomats around with real backbone to deal with Assad. How about James Baker, Madeleine Albright, or Henry Kissinger? Each have more cojones than Annan ever will hope to have.

Four, the longer the U.S. dawdles about providing lethal arms to the Free Syrian Forces, the more likely that a radicalized anti-American regime will emerge from the ruins of the Assad dynasty. If the U.S. can’t get itself to do the right thing by covertly supporting Assad’s opponents, then get out of the way and stop throwing every manner of cold diplomatic water on the Turks, and the Arab League if they intend to step up to the plate.

It is getting dangerously late for the Obama administration to get on the right side of history in Syria. It erroneously asserts that further militarization of the conflict will only fuel a spillover into neighboring countries. How wrong it is. As the administration resists giving the green light to Turkey and the Arab League to provide covert military assistance to the Syrian opposition, the conflict has already spilled over into Lebanon and Iraq. There have been outbreaks of Shiite-Sunni confrontations in and around Beirut while Assad has radicalized his own people by the minute. Al Qaeda and other Sunni extremists are pouring across the border from neighboring Iraq and Lebanon to fill the vacuum created by the thirst for vengeance among Assad’s victims. The horrific bombings in Damascus in recent weeks could very well be the evil work of al Qaeda and its Sunni fellow travelers.

Five, the air space in and out of Syria should be scrutinized for any international carrier hauling military equipment into Syria. If the U.N. refuses to act in unison against the Russian and Iranian arms resupplies, then the U.S. and its European Union allies should sanction any air cargo or shipping company that is reasonably suspected of funneling arms to Assad.

Six, if we leave the feckless Syrian opposition to figure out how to coalesce, there will never be a legitimate opposition to Assad. The time has come for the U.S., the EU, Turkey and the Arab League to adopt a joint approach toward bringing some much needed order out of the chaotic Syrian opposition. The urgency of the project is all the more acute instead of standing by the sidelines criticizing Assad’s opponents for failing to agree among themselves.

Seven, time for armchair generals to get out the way. The Syrian people from the major cities of Aleppo and Homs to the small towns such as Houla are desperately short of food and medicine. Assad has prevented every form of humanitarian relief from reaching his victims, who are perishing by the minute. To temporarily alleviate this human suffering, and notwithstanding Assad’s threats to prevent the aid, the Arab Red Crescent Society should be leading a humanitarian airlift under the protection of U.N. cargo planes protected by U.S., Turkish, Arab, and EU air forces to facilitate the delivery of crucial humanitarian supplies. If Assad’s forces intervene, then he should be subjected to an aviation and maritime quarantine barring flights in and out of Damascus or the Syrian port of Latakia to any country supporting the humanitarian relief operation.

In the final analysis, I have no doubt that Assad has instructed his lackeys that they either hang together or hang separately. Dislodging the likes of Assad and his clique may take a total domestic uprising. Short of that it will not be easy removing this tyrant and this internationally rogue regime in time to avoid the complete radicalization of Syria under a more extremist Sunni movement. But there is an urgency to try what we can short of boots on the ground because it just may succeed where inaction is doomed to fail.

The longer it takes for the Obama administration to drop the “why we can’t” and embrace a “yes we can” to a new, more robust Syrian policy, the more likely there will be NO plan that can be thrown together by the U.S., the U.N., or even the Russians in time before Syria descends into the darkness of an all-out, protracted civil war that will engulf neighboring states.

Assad, unlike Yemen’s Saleh, but very much like Libya’s Gaddafi, is bent on taking his country down with him. Even if he chooses to die in the Bashar Bunker having killed every last Syrian opposed to him, there is every U.S. interest at stake I can think of to prevent that nightmare from happening short of slip sliding into another Middle East war.

* Former U.S. Ambassador to Morocco. He spent his formative years in the Middle East including Lebanon from 1960-1968.