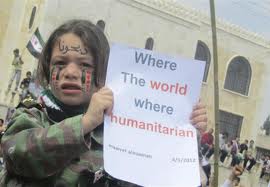 A total of 98 people, including 61 civilians, have been killed in violence in Syria on Tuesday, as clashes raged between regime troops and rebels.

This figure included the latest “massacre”, in which 13 civilians died in the north-west Deir region, the London-based observatory’s head Rami Abdul Rahman told AFP by telephone.

The victims “were executed with a bullet in the head, according to first reports from the region”, he said, urging UN observers on the ground to probe the alleged atrocity and identify the perpetrators.

The fresh violence came as international envoy Kofi Annan urged Syrian President Bashar al-Assad to “act now” to end 15 months of bloodshed, warning that the country had reached a “tipping point” as Western governments ordered out its top diplomats.

The apparently co-ordinated expulsion orders issued by the European Union, the United States and other governments, including Australia, Canada and Switzerland, was in response to the killing of at least 108 people, nearly half of them children, during an assault by pro-government forces in Houla last week.

Most of Tuesday’s violence took the form of bombardments or clashes between the Syrian army and rebel forces, the Syrian observatory said.

More than 13,000 people have been killed, most of them civilians, since the uprising against Assad’s regime erupted in March last year, according to the Britain-based watchdog.