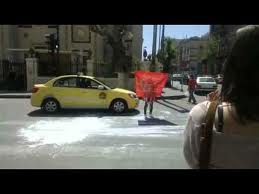 BEIRUT – The woman wearing a blood-red dress stood in the middle of a busy intersection outside Syria’s parliament holding up a red banner: “Stop the killing, we want to build a homeland for all Syrians.” Drivers tooted their horns and supporters clapped.

Rima Dali’s act of defiance last month — which landed the 33-year-old in prison for several days — was a call for the opposition to focus again on peaceful protests to bring down President Bashar Assad. It has inspired other activists who worry that their cause is going astray as more Syrians take up arms in the face of the regime’s withering crackdown.

They say armed resistance costs the opposition the moral high ground and boosts the regime line that it is battling terrorists, not a popular uprising. The spiraling violence has also taken on fearsome sectarian overtones, threatening to push the country into full-blown civil war. Al-Qaida-style suicide bombings have become increasingly common.

“This is what the regime wanted and we fell in the trap,” said Anas, a 28-year-old from the central city of Hama who participated in the first marches against Assad in March 2011.

“People say the regime and the inaction of the international community left us with no choice, but I still think we would have been more effective if it had remained peaceful,” he said, declining to be identified by his full name for fear of retaliation by authorities. 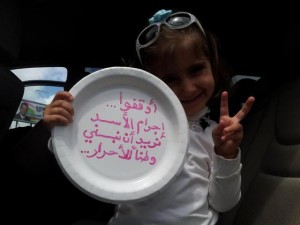 But those favoring nonviolence are pushing back against a very strong tide. Barrages of gunfire by regime forces on peaceful marchers, military sieges of opposition areas and the snatching of activists from their homes over the past 13 months have convinced many that brute force is the only way to topple Assad.

The Syrian uprising began as a largely peaceful protest movement calling for change in the wake of similar uprisings in Tunisia, Egypt and Libya. The unarmed protests continue — and are still met by gunfire from regime forces. On Friday, security forces opened fire on demonstrators at Aleppo University, killing a teenager.

The U.N. said in late March that at least 9,000 people were killed in the conflict. More have died since then, with activists reporting daily death tolls of as many as several dozen.

Peaceful marches are now often overshadowed by the fight between Syrian troops and rebels from the Free Syrian Army, or FSA, made up largely of army defectors.

Mohammad Saeed, an activist from the Damascus suburb of Douma, which has seen intense fighting between government forces and army defectors, defended the FSA’s role.

“Everyone knows their (the FSA’s) capabilities are very limited. They cannot protect people from the tank shells and machine gun fire but they can sometimes protect protesters at least from the shabiha,” he said, referring to pro-government militiamen.

“When a soldier defects, what is he supposed to do? Go sit at home?”

FSA fighters also launch hit-and-run attacks on military checkpoints and convoys. Their attempts in recent months to hold pro-opposition territory — whether city neighborhoods or parts of provinces — has brought an intensified regime onslaught that turned those areas into war zones.

Even some who think the opposition’s emphasis should be on peaceful protests do not believe the FSA should put down its arms.

“Every revolution has two tracks, I don’t see the two necessarily contradicting themselves,” said Sarah, a 22-year-old student in Damascus.

Sarah is part of the “Stop the Killing” campaign, which started on April 8 with Dali’s one-woman protest. Activists of the group have popped up around the Syrian capital, holding the same red banner — and getting arrested every time. After her release from jail, Dali rejoined the campaign.

“We insist on remaining peaceful. We would rather die before carrying arms, but unfortunately not everyone has that same level of awareness,” said Sarah, who spoke on condition her full name not be used because she feared punishment.

Another group to which Sarah belongs — “Nabad el Shabab” (Pulse of the Youth) — distributes flyers or slaps anti-government stickers on public buses. “Hand in hand to topple the tyrant,” read some of the stickers, which are hastily torn off by security agents or regime supporters.

“But that’s not where I see myself,” he said. He also does not feel represented by the Syrian National Council, the main opposition group, which now openly calls for foreign armed intervention to oust Assad. Anas says he feels like a bystander in a conflict that has taken on regional and international dimensions and is no longer purely Syrian.

Still, the urge for self-defense is strong.

One activist from Damascus has started an online video series to teach ordinary Syrians how to defend themselves using knives, light weapons and their bare hands. The series was born out of frustration at

seeing Syrians humiliated and killed, said the producer, who identifies himself by an online nickname, Omar al-Shami.

“People are being slaughtered every day, the level of crimes being perpetrated is hair-raising,” he said in an interview via Skype from an undisclosed location. “So the idea was simply to give people the knowledge and the means to defend themselves.”

In one episode, Omar — wearing a black mask — stands behind a table laden with assault rifles including a Russian Drugunov sniper rifle, a U.S.-made M16 and an SKS Soviet semiautomatic rifle, explaining the difference between them. In others, he teaches viewers hand-to-hand combat skills to fend off an attacker.

The authenticity of the videos or weapons could not be verified.

now lives abroad in Dubai, said such initiatives are not useful.

Al-Ahmad has joined the Syrian Democratic Platform, a new grouping with well known opposition figures such

as Michel Kilo, Fayez Sara and Hazem Nahar, which seeks to topple the regime using civil resistance. He was among 250 Syrian dissidents who took part in a conference in Egypt last month on ways to safeguard the peaceful aspect of the revolution.

Al-Ahmad said the regime is comfortable fighting an armed insurgency that it can crush, pushing the country into sectarian civil war in the process, but is terrified of peaceful protest.

“You can topple the regime through the use of weapons,” he said, “but at the end of the day you would have lost the country.”