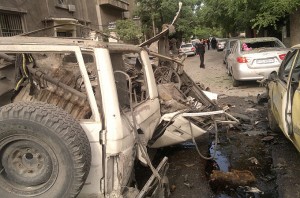 Explosions have struck two cities in Syria, with reports of at least five people dead, a day after a spokesman for Kofi Annan, the UN-Arab League envoy, said the UN peace plan for Syria remained on track.

The UK-based Syrian Observatory for Human Rights reported that five people were killed in a blast in Aleppo on Saturday, but gave no further details.

Earlier, on the central Damascus highway of Sharia al-Thawra, a bomb attached to a military vehicle caused destruction to nearby cars and buildings, but there were no reports of casualties.

The blast shook the neighbourhood near a military food co-operative, destroying nine cars and leaving a crater in the street, according to a reporter from the AP news agency who visited the scene.

No one immediately claimed responsibility for the blasts and there has been no mention of either explosion on Syrian State TV.

Al Jazeera’s Anita McNaught, reporting from Mardin in Turkey, said: “The blast in Aleppo seems to have been in one of the poorer suburbs of Tala azaziya.”

On Friday, Ahmad Fawzi, Annan’s spokesman, told a UN briefing in Geneva: “The Annan plan is on track… And a crisis that has been going on for more than a year is not going to be resolved in a day or a week.

The plan aims at ending the violence, bringing in relief, releasing detainees and forging a political process to address grievances in Syria.

His comments came as the Local Co-ordination Committees, an opposition activist network, announced the deaths of 33 people in renewed violence across the country. Massive anti-government protests were also reported on Friday.

In the central city of Hama, government forces used gunfire to disperse protesters in two districts of the city and in another town of the same province, activists reported.