Sept. 11 ‘mastermind,’ co-conspirators back before judge 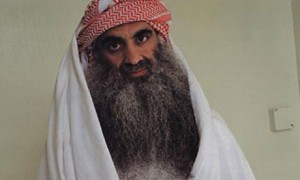 The self-proclaimed mastermind of the Sept. 11 attacks and four accused co-conspirators will appear in public for the first time in more than three years Saturday, when U.S. officials start a second attempt at what is likely to be a drawn out legal battle that could lead to the men’s executions.

Khalid Sheikh Mohammed and his co-defendants are to be arraigned at a military tribunal at Guantanamo Bay on charges that include that include 2,976 counts of murder, one for each person killed in the worst terrorist attack on U.S. soil.

In the past, during the failed first effort to prosecute them at the U.S. base in Cuba, Mohammed has mocked the tribunal and said he and his co-defendants would plead guilty and welcome execution. But there were signs that at least some of the defense teams were preparing for lengthy fight, planning challenges of the military tribunals and the secrecy that shrouds the case.

The arraignment is “only the beginning of a trial that will take years to complete, followed by years of appellate review,” attorney James Connell, who represents defendant Ali Abd al-Aziz Ali, told reporters gathered at the base to observe the hearing.

“I can’t imagine any scenario where this thing gets wrapped up in six months,” Connell said.

Defendants in what is known as a military commission typically do not enter a plea during their arraignment. Instead, the judge reads the charges, makes sure the accused understand their rights and then moves on to procedural issues. Lawyers for the men said they were prohibited by secrecy rules from disclosing the intentions of their clients.

Jim Harrington, a civilian attorney for Ramzi Binalshibh, a Yemeni prisoner who has said at one hearing that he was proud of the Sept. 11 attacks, said he did not think that any of the defendants would plead guilty, notwithstanding their earlier statements.

Army Capt. Jason Wright, one of Mohammed’s Pentagon-appointed lawyers, declined to comment on the case.

As in previous hearings, a handful of people who lost family members in the attacks were selected by lottery to travel to the base to watch the proceedings. Several said they were grateful for the chance to see a case they believe has been delayed too long.

Cliff Russell, whose firefighter brother Stephen died responding to the World Trade Center, said he hoped the case would end with the death penalty for the five Guantanamo Prisoners.

“I’m not looking forward to ending someone else’s life and taking satisfaction in it, but it’s the most disgusting, hateful, awful thing I ever could think of if you think about what was perpetrated,” Russell said.

Suzanne Sisolak of Brooklyn, whose husband Joseph was killed in his office in the Trade Center’s North Tower, said she is not concerned about the ultimate outcome as long as the case moves forward and the five prisoners do not go free.

“They can put them in prison for life. They can execute them,” Sisolak said. “What I do care about is that this does not happen again. They need to be stopped. That’s what I care about because nobody deserves to have this happen to them.”

The arraignment for the five comes more than three years after President Barack Obama’s failed effort to try the suspects in a federal civilian court and close the prison at the U.S. base in Cuba.

Attorney General Eric Holder announced in 2009 that Mohammed and his co-defendants would be tried blocks from the site of the destroyed trade center in downtown Manhattan, but the plan was shelved after New York officials cited huge costs to secure the neighborhood and family opposition to trying the suspects in the U.S.

Congress then blocked the transfer of any prisoners from Guantanamo to the U.S., forcing the Obama administration to refile the charges under a reformed military commission system.

New rules adopted by Congress and Obama forbid the use of testimony obtained through cruel treatment or torture. Gen. Mark Martins, the chief prosecutor, said the commission provides many of the same protections that defendants would get in civilian court. “I’m confident that this court can achieve justice and fairness,” he said.

But human rights groups and the defense lawyers say the reforms have not gone far enough and that restriction on legal mail and the overall secret nature of Guantanamo and the commissions makes it impossible to provide an adequate defense.

They argue that the U.S. has sought to keep the case in the military commission to prevent disclosure of the harsh treatment of prisoners such as Mohammed, who was waterboarded 183 times and subjected to other measures that some have called torture.

Mohammed, a Pakistani citizen who grew up in Kuwait and attended college in Greensboro, North Carolina, has admitted to military authorities that he was responsible for the Sept. 11 attacks “from A to Z,” as well as about 30 other plots, and that he personally killed Wall Street Journal reporter Daniel Pearl. Mohammed was captured in 2003 in Pakistan.

His four co-defendants include Binalshibh, a Yemeni, who was allegedly chosen to be a hijacker but couldn’t get a U.S. visa and ended up providing assistance such as finding flight schools; Waleed bin Attash, also from Yemen, allegedly ran an Al Qaeda training camp in Afghanistan and researched flight simulators and timetables; Mustafa Ahmad al-Hawsawi, a Saudi accused of helping the hijackers with money, Western clothing, traveler’s checks and credit cards; and al-Aziz Ali, a Pakistani national and nephew of Mohammed, who allegedly provided money to the hijackers.