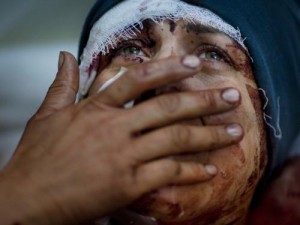 Syrian forces are executing scores of suspected opposition sympathisers in the northern city of Idlib, often burning their bodies in piles or torching them in their homes then sending family members to find them, witnesses say.

Idblib residents who spoke to an Amnesty International official in April painted a dire portrait of a city at the mercy of regime troops and irregular loyalists who routinely sweep homes seeking dissenters to kill.

The Amnesty report, prepared by the senior crisis adviser Donatella Rovera, gathered harrowing testimonies of victims and their families, caught up in a purge of Idlib and surrounding villages that has steadily intensified over the past six months.

The report says hundreds of homes in some villages have been burned down and their populations terrorised by forces who kill with impunity.

After troops routed Homs in early March, Idlib became a focal point of the violence ravaging Syria, with regime forces hunting down defectors who had fled their posts in the city and rallied in the nearby hinterland. Residents say loyalist incursions became more intensive around this time, the report confirms.

A woman whose house was torched on 11 March was allegedly told that it was pointless reporting the incident unless she blamed terrorists.

“The neighbours saw it was military security members who attacked my house,” she told Amnesty. “It was the middle of the day and there were tanks and soldiers and security forces members everywhere in the area; how on Earth could this have been the doing of armed groups? So I did not lodge a complaint.”

In the village of Taftanaz, two 80-year-old men were reportedly killed in their homes, which were then burned around them.

“I had been staying with relatives across the street and my husband was at home,” the wife of one of the men told Amnesty. “When I went back home I found it burned down but did not find my husband. I went out and asked the soldiers outside where they had taken him. I thought they had arrested him. A soldier replied: ‘Go back in and look for him’. I went back and found his remains in a pile of ash.”

In the Sarmin area near Idlib a mother claimed that her three sons had been taken from their home early on 23 March and killed. “[The military] did not let me follow them outside; every time I tried to go out they pushed me back,” the mother said. “When I was able to go outside, after a couple of hours, I found my boys burning in the street. They had been piled on top of each other and had motorbikes piled on top of them and set on fire.”

The testimonies add to the weight of evidence that has emerged from Syria over the past 14 months of an uprising that has repeatedly been met with brutal means.

In Idlib, as in Homs, what was once a popular, unarmed uprising, has given way to a two-way fight that regularly pitches the regime military against guerilla forces made up of the rebel Free Syria Army and residents who have taken up arms.

Foreign fighters are trickling into battle zones, from countries like Libya, Iraq and neighbouring Lebanon, as the violence takes on the feel of a full-blown civil war with regional implications.

A ceasefire brokered in early April by the United Nations special envoy to Syria, Kofi Annan, was supposed to pull both sides back from the brink of further chaos. However, only a small number of the 300 peacekeepers that Syria agreed to receive have so far made it to the country.

Annan is likely to give the United Nations a bleak assessment of the mission’s success as soon as this weekend.