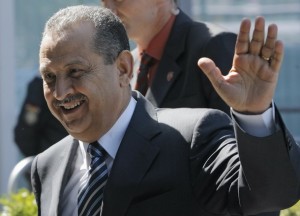 A high-ranking former Libyan official who served under Moammar Gadhafi was found dead in the Danube River, in Vienna, the BBC reported Sunday, citing Austrian police.

Shukri Ghanem, 69, initially defected to Rome from Libya in June 2011, amid the uprising that ultimately ousted Gadhafi, the Tripoli Post reported. He told the Italian Ansa news service that he left “to fight for a democratic country.”

Ghanem was Libyan prime minister from 2003 to 2006 and later served as oil minister until his departure in 2011. Prior to his death, Ghanem had been working as a consultant for a Vienna-based company.

On Sunday, he left his home normally dressed, police told the BBC. He was found floating in the river early in the morning, the Associated Press reported, citing police spokesman Roman Hahslinger.

Hahslinger said the body showed no external signs of violence, adding that officials will carry out an autopsy in the coming days.