Libyan solution for Syria is in the works 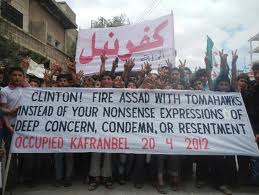 At a meeting of the 14-member Friends of Syria group in Paris on Thursday, U.S. Secretary of State Hillary Clinton raised the possibility of NATO involvement in Syria even as the United Nations Security Council made clear that the Syrian government’s continued violations of a ceasefire won’t prevent the deployment of as many as 300 UN observers.

UN Secretary-General Ban Ki-Moon and his special envoy to Syria, Kofi Annan, asked the Security Council to authorize an expanded mission of unarmed military observers, saying Assad’s regime has failed to abide by the terms of a six-point peace plan it negotiated with Annan last week.

In Paris, Clinton said Turkey may invoke the North Atlantic Treaty Organization’s charter provision triggering consultations if a member’s security is threatened. Turkey, she said, has already discussed with NATO “the burden of Syrian refugees on Turkey, the outrageous shelling across the border from Syria into Turkey a week ago, and that Turkey is considering formally invoking Article 4” of the NATO charter.

Article 4, if invoked, would oblige Turkey’s NATO partners to consider action to stop the Syrian Army from shelling rebel positions along the border areas. Last week, after Syrian troops fired shells into Turkey, the Turkish government threatened to invoke Article 5, which refers to an attack on one NATO member as an attack on all.

Clinton stopped short of a direct call for military intervention, but urged the UN to adopt a resolution authorizing an arms embargo — a policy adopted during the Libyan crisis — and tougher sanctions.

In a joint statement, the Friends of Syria, a group that includes France, the U.S., Canada, Saudi Arabia and Qatar, among others, said the Annan plan was the “last hope.”

Canadian Foreign Affairs Minister John Baird, who was in Paris for the meeting, said Canada will “push aggressively” to ensure Syria complies with the peace plan. That could include sending UN observers to monitor the ceasefire, Baird said in a teleconference from Paris, adding, however, it was “premature” to talk of sending Canadian soldiers to the region.

Baird said the Friends of Syria “didn’t discuss any sort of military engagement.” Instead, the group sent “a strong message” to the Syrian regime.

Perhaps so, but French President Nicolas Sarkozy compared the situation in Syria to that in Libya before the NATO campaign that resulted in the ouster of Moammar Gadhafi’s regime. “Bashar al-Assad is lying. He wants to wipe (the town of) Homs off the map just like Gadhafi wanted to destroy Benghazi.”

Last year, as they sought to justify the Libyan campaign, Sarkozy and other Western leaders regularly deployed rhetoric about humanitarian intervention, “the responsibility to protect” and the need to prevent more civilian deaths.

Sarkozy echoed that rhetoric Thursday, saying the time had come for active intervention against the Assad regime. “The solution is the establishment of humanitarian corridors so that an opposition can exist in Syria.”

Elsewhere, in a briefing to the Security Council, Ban demanded the regime pull its heavy military equipment out of cities in accordance with the Annan ceasefire plan. “Violent incidents and reports of casualties have escalated again in recent days, with reports of shelling of civilians and abuses by government forces. The government reports violent actions by armed groups.”

According to various reports, the Syrian regime has not fully withdrawn troops and heavy weapons from towns. As well, it has reportedly stepped up the use of helicopter gunships to crush rebel towns and cities in the north.

That move alone could add to the pressure on Western powers to impose a no-fly zone over the country much like they did in the Libyan campaign. But France is also pushing for a more robust military presence on the ground, too.

Alain Juppe, the French foreign minister, said the failure of the Annan plan would lead to “civil war.” Arguing that “several hundred” international monitors were needed in Syria to police the ceasefire, he also said the force needed to be “well-equipped, robust and with the means to move around (Syrian) territory.”

“We cannot wait, time is short,” Juppe said. “The observers must be deployed fast and must be able to act without obstacles. The Annan plan is a guarantee of peace and freedom — its failure the path to civil, even regional, war.”

For its part, the British government opposed the establishment of humanitarian corridors, pointing out that they would need to be patrolled by military forces that could be a targeted by Assad’s forces.

Nevertheless, the calls for a Libya-like intervention in Syria are increasing, and, it seems, being given serious consideration. On Thursday, Syria’s rebel Free Syrian Army, sounding much like the rebels who challenged Gadhafi’s regime, said it was time for outside military intervention.

American military officials, who only last month were doubtful of the military option when it comes to Syria — just as they were initially reluctant to go to war in Libya last year — are, it seems, changing their minds to suit the shifts in political sentiment.

Speaking to the House Armed Forces Committee in Washington, U.S. Defence Secretary Leon Panetta effectively invoked the notion of regime change when he said “the bottom line is that anything that takes the Assad regime down is a step in the right direction.”

“The department of defence is reviewing and continuing to review plans for a variety of possible scenarios should the president determine that further steps are necessary,” Panetta said, noting that NATO’s operation in Libya last year would serve as a template. “We have looked at a variety of options, including the possibility of developing humanitarian corridors.”

Nonetheless, Panetta, along with Army Gen. Martin Dempsey, who also appeared before the committee, was cautious about American military involvement. The U.S. would need “a clear legal basis” and broad regional and international support to act militarily in the conflict, Panetta said, citing the UN resolution that authorized action in Libya last year.

“What the international community has to assure is that, if that happens, it happens in the context of legitimate reforms that keep that country together and that serve the Syrian people,” Panetta said.

Dempsey, chairman of the Joint Chiefs of Staff, also raised the spectre of another threat beyond the current violence — the security of Syria’s chemical and biological weapons. “Spillover into neighbouring countries is an increasing concern,” he said, citing the flow of refugees and the chance terrorists may try to capitalize on the chaos. The U.S. must be “especially alert to the fate of Syria’s chemical and biological weapons.”

“I think we’re in for 10 or 15 years of instability in a region that has already been characterized by instability,” the general said.

That certainly has held true for Libya since Gadhafi’s removal. Libya’s new leaders are having a difficult time gaining control of the country and asserting their authority against various still-fighting factions. As well, the terrorist threat is well established, with al-Qaeda in the Islamic Maghreb apparently gaining access to missiles and arms from abandoned Libyan Army stockpiles. Some observers predict a regional war across much of North Africa as the unintended consequence of the Libyan campaign.