Could this be the last Summit of the Americas? 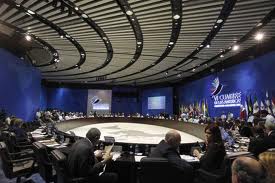 Could this weekend’s gathering of about 30 Western Hemisphere leaders be the last Summit of the Americas?

The question hung in the air as the leaders convened Sunday for a private morning retreat.

Washington, backed by Canada, was standing fast against widespread demands to include in the meeting’s final declaration language specifying that Cuba be included in future hemispheric summits.

“All the countries here in Latin American and the Caribbean want Cuba to be present. But the United States won’t accept,” President Evo Morales of Bolivia told reporters late Saturday. “It’s like a dictatorship.”

Morales and other leftist leaders have been insistent that this weekend’s meeting in this Caribbean colonial port, which wraps up at midday, will be the last regional summit under Organization of American States auspices unless Cuba is invited in the future.

The top international adviser to Brazilian President Dilma Rousseff, Marco Aurelio Garcia, said the differences could mean the summit will end with no final declaration.

U.S. President Barack Obama’s peers lectured him Saturday over his unflagging opposition to Cuban participation due to U.S. objections to the communist-governed Caribbean island’s lack of democracy.

But a senior U.S. administration official said in a briefing for White House reporters Saturday evening that the subject did not come up in any of Obama’s brief meetings on the summit’s sidelines with the leaders of Guatemala, El Salvador, Argentina and Peru.

The foreign ministers of Venezuela, Argentina and Uruguay have said their presidents won’t sign any declaration unless the U.S. and Canada remove their veto of future Cuban participation.

Asked if Obama and the leaders discussed the question of countries not signing off on the final declaration, the official said, “No.”

The Cuba issue led Ecuadorean President Rafael Correa to boycott the summit, and Nicaragua’s leftist President Daniel Ortega also sat out the meeting, though he offered no explanation. Venezuela’s cancer-stricken president Hugo Chavez also was absent. He flew Saturday not from Venezuela to Cuba, where he has been undergoing radiation therapy.

Even moderates such as Santos and Rousseff said there should be no more America’s summits without the communist island.

The Obama administration has greatly eased family travel and remittances to Cuba, but has not dropped the half-century U.S. embargo against the island.

U.S. commercial and political influence in the region has been in decline as China gains on the U.S. as a top trading partner, and many analysts say these regional summits tend to be unwieldy and only make sense if they are a departure for serious follow-up on substantive issues.

“The label ‘Americas’ doesn’t seem to mean that much anymore unless you’re a cartographer,” said analyst Adam Isacson of the Washington Office on Latin America.

A splintering of old alliances due to region and ideology has cost the OAS clout and, many analysts say, relevance.

The main alternative summits, such as the Latin America-Caribbean group and the IberoAmerican session, exclude both The United States and Canada.

At this weekend’s summit, Obama was criticized by some leaders for refusing to abandon a drug war that has claimed tens of thousands of lives and undermined governments, although he didn’t shy from listening to arguments on the other side.

“I don’t mind a debate around issues like decriminalization,” he said in a pre-summit interview with Univision television. “I personally don’t agree that that’s a solution to the problem.”

“But I think that given the pressures that a lot of governments face here — under-resourced, overwhelmed by violence — it’s completely understandable that they would look for new approaches,” Obama added.

The summit’s host, President Juan Manuel Santos of Colombia, urged a reconsideration of the war on narcotics, citing the irony of Colombia’s successes: While it extradites hundreds of alleged drug traffickers for trial to the U.S., criminals turn to other countries where law enforcement is weaker. Central America and Mexico, in particular, are bleeding as traffickers shift to countries of lesser resistance.

“We know that our success has (negatively) affected other countries and we are pedaling and pedaling and pedaling like we’re on a stationary bike,” said Santos. “The moment has come to analyze if what we’re doing is best or if we can find a more effective and cheaper alternative for society.”

For some, the summit was overshadowed by an embarrassing scandal involving prostitutes and U.S. Secret Service agents that widened when the U.S. military said five service members staying at the same hotel might have also been involved in misconduct.

U.S. Rep. Peter King told The Associated Press after being briefed on the investigation that “close to” all 11 of the Secret Service agents who were put on leave Saturday had taken women to their rooms at a hotel a few blocks from where Obama is staying. He said the women were “presumed to be prostitutes” but investigators were interviewing the agents.

Three waiters at the hotel told the AP that about a dozen U.S. government workers they presumed were the Secret Service agents had spent a week drinking heavily. One said he witnessed their apparent supervisor line them up and scold them on the hotel’s back terrace at about 4 p.m. Thursday.

Immediately thereafter, the men packed their bags and left, said the waiter, who spoke on condition of anonymity because, like his colleagues, he feared for his job.