Lawlessness and chaos: Damascus a haven for criminals 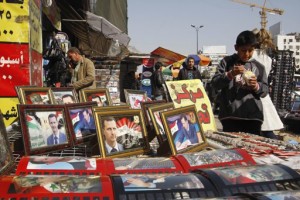 Streets of Damascus that were crowded until late at night stand mostly empty after sunset as Syrians stay home, fearing robberies and kidnapping. After a year of chaos, a country that once boasted it was the safest in the Middle East is experiencing a surge in crime.

Reports of thefts, armed robberies and house break-ins have swelled, an apparent sign of criminals taking advantage of the turmoil as the regime of President Bashar Assad wages a bloody, nationwide crackdown against an opposition demanding his ouster.

The government blames members of the opposition or army defectors for much of the crime. The opposition, in turn, blames the regime, saying it is allowing the lawlessness so it can tell the public that the uprising has brought chaos.

But it may be that security forces are now too distracted. Syria’s 17 security and intelligence agencies used to control the country with an iron fist, and crime was rare as many feared the regime’s brutality. Several pardons issued by Assad over the past year as a gesture to the opposition are believed to have freed criminals — including convicted murderers and thieves — alongside some political prisoners.

Whatever the cause, Damascus residents say criminals are operating with unprecedented boldness.

A woman who lives in the posh Damascus neighborhood of Tijara recounted a harrowing armed robbery against her family that she said took place earlier this month. At 6 in the evening, three gunmen with automatic weapons banged on their apartment door while her mother and 8-year-old brother were home alone. The brother opened the door and the assailants stormed in, she told The Associated Press by phone from the Syrian capital.

“This is the first such case in this neighborhood in 15 years,” she said the police told her. The woman spoke on condition of anonymity for fear the criminals might harm members of her family.

Another Damascus resident said a neighbor — a wealthy, pro-government businessman in his late 40s — was kidnapped while going to work and was only released after his family paid a ransom worth $300,000. After the December kidnapping the man left Syria along with his wife and children. The resident also spoke on condition of anonymity for fear of making herself a target.

In the central city of Homs, a resident told the AP that gunmen knocked on the door of his neighbor, put a pistol in his face and said to him, “Give us the keys of your car.”

The man said the gunmen drove away. The Homs resident, who also spoke on condition of anonymity, said his neighbor still lives in fear.

Damascus residents say that many people who own luxury cars keep them at home and move around in taxis in order for them not to have their cars stolen.

Homs resident Wael, 27, said crime has doubled in some restive neighborhoods because “there is no security and people are now behaving as they want.”

“In the past, we used to sleep with our windows open. Now, we cannot do that,” said Wael, who asked that he only be identified with his first name.

Iyad al-Bunni, 58, a merchant from Damascus, said the absence of stability and security has allowed thieves to thrive. “Armed groups are using the security vacuum to carry out acts of looting,” he said.

Pinning down the extent of the rise in crime is difficult, in part because of the potential for violence connected to the uprising and the regime’s crackdown to get mixed in with nonpolitical crime. The regime denies the existence of an uprising, saying it faces not a popular revolt but violence from “terrorists” — so it likely includes deaths connected to political violence in its crime rate.

The revolt began a year ago with peaceful protests against Assad around the country that were met with gunfire.

Since then, violence has spiraled. Some rebels have taken up arms, attacking army positions and reportedly gunning down pro-regime figures. Security forces have besieged entire cities or rebellious neighborhoods, hammering residential areas with artillery. Pro-regime militiamen known as Shabiha have targeted suspected opposition supporters. Tit-for-tat sectarian killings have taken place between majority Sunnis, who largely back the opposition, and minority Alawites, who stand by the regime.

The United Nations estimates that 8,000 people have been killed in the violence surrounding the uprising.