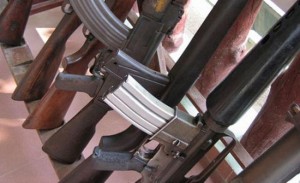 Iranian sources in Dubai report that a shipment of arms and ammunition hailing from Saudi Arabia is on its way through Jordan, to be smuggled across the border with Syria to equip the armed uprising. According to the sources, Saudis are acting in anger against US non-intervention to stop Assad’s crackdown and Turkey’s all-talk, no-action stance.

The Saudi rulers were moved to offset the Iranian arms airlift to Syria via Iraq.

For their part, Turkish army sources said they would have to face up to hundreds of thousands of refugees from Syria in case of a full-fledged Libya-style military operation on the neighbouring country.

The rift between the Saudi-led anti-Iran Gulf block and the Iran-led alliance of Syria, Hizbollah and Hamas is widening. Asked whether they are still mulling the possibility of creating so-called safe zones inside Syria, near the border, the Turkish army sources gave cautious replies, pointing out that such a move would by all accounts amount to open warfare, from which their country refrains unless explicitly authorized by UN resolutions and appropriately backed up by its military allies.

The death toll of today’s bombing in the Syrian capital is reported to have reached 27, while those left wounded amount to 97 people.