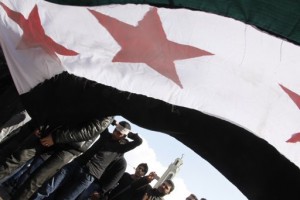 The protest in support of the Syrian revolution was held in Martyrs’ Square in Downtown Beirut, the report said, adding that protesters called for freedom and justice and chanted for overthrowing the Syrian regime.

The NNA added that the protest in support of the Syrian regime was held in Al-Debbas Square in Downtown Beirut.

Syria has witnessed anti-regime protests since mid-March 2011. The United Nations estimated that more than 8,000 people have been killed in the regime’s crackdown on dissent.