Over 23 Palestinians killed as Israeli strike on Gaza continues 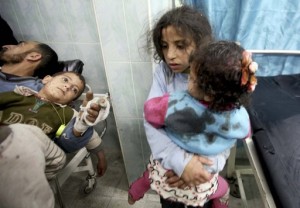 The victims were named as Mohammed Mustafa al-Hasumi, 65, and his daughter 35-year-old Faiza al-Hasumi. The deaths bring to five the number of people killed in Gaza, with 45 wounded in a string of Israeli raids since midnight.

Two Gaza militants were killed in Israeli air strikes and a teenager died in an unexplained explosion. The militants belonged to Islamic Jihad’s armed wing, the al-Quds Brigades, and were killed in two raids around the southern city of Khan Yunis. In a statement, the group named them as Raafat Abu Eid and Hamada Suleiman Abu Mutlaq, both 24.

15-year-old Nayef Qarmut died, and six other teenagers were injured, in an explosion near the northern town of Beit Lahiya which Palestinian medics blamed on an Israeli drone strike.

However, the military denied carrying out any activity in the area at the time, and an AFP correspondent at the scene confirmed there was no sign that a missile had hit the area.

A spokeswoman said militants had fired more than 20 rockets at Israel since midnight, raising the number fired since Friday to 180, at least 46 of which were intercepted by Israel’s Iron Dome air defence system.

Violence has spiked since Israeli jets killed Zuhair al-Qaisi, the head of the Popular Resistance Committees militant group, on Friday.

The incident prompted barrages of Palestinian rocket fire into the Jewish state.

The violence has prompted concern in the United States and Europe. Today Beijing also weighed in, urging Israel to halt its raids and for the Palestinians to stop their rocket fire.