Protests against the Syrian regime held in Beirut 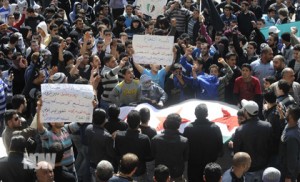 Syria has witnessed anti-regime protests since mid-March 2011. The United Nations estimates that more than 7,500 people have been killed in the regime’s crackdown on dissent.