Obama: Republican candidates are beating the drums of war 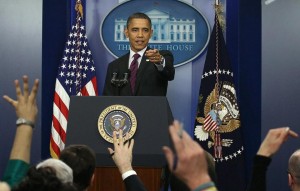 “When I see some of these folks who have a lot of bluster and a lot of big talk … it indicates to me that that’s more about politics than actually trying to solve a difficult problem,” Obama said during his first press conference since November, giving him a spotlight on the GOP’s Super Tuesday elections.

Presenting himself as the sober, thoughtful leader trying to preserve peace in the Middle East, the president accused his rivals of casually lobbing rhetorical bombs without worrying about the consequences.

If the Republicans so eager for a display of American military might think that “it’s time to launch a war,” Obama said without mentioning his rivals by name, “they should explain to the American people exactly why they would do that and what the consequences would be.”

The pointed criticism was part of a wide-ranging conference touching on housing issues, the controversy over Rush Limbaugh’s diatribe against a female congressional witness, and the brutality of the Syrian government. But the discussion quickly centered on concerns that Iran is trying to build a nuclear bomb.

GOP candidates who want war ‘should explain to the American people exactly why they would do that.’

Earlier in the day, the United States, Britain, France, Germany, Russia and China agreed to resume talks with Iran over the issue. Also, Israeli Prime Minister Benjamin Netanyahu has been in Washington meeting with the administration on how to proceed. Netanyahu has previously indicated that diplomacy and sanctions are not working and some Western observers fear Israel is planning a preemptive strike against its arch-enemy. On Monday, Obama urged the leader to be patient, saying there is still a “window that allows for a diplomatic resolution to this issue.”

The discussion on Iran, which has previously made threats against Israel, is intensifying on the campaign trail. Republican candidates Mitt Romney, Newt Gingrich, and Rick Santorum have declared that Obama’s reliance on diplomacy and sanctions betrays a timidity that imperils the United States.

In an op-ed in the Washington Post on Tuesday, Romney called Obama “America’s most feckless president since [Jimmy] Carter” and said that as the president “frets,” the radical regime is developing a bomb.

Romney, saying that the combination of economic sanctions and offers of negotiation with the mullahs in Tehran are bound to fail, laid out some of the steps he would take to confront Iran, including dispatching aircraft carriers to the Persian Gulf and increasing military aid to Israel.

Romney pressed his attack later in the day, via a video feed to the American Israel Public Affairs Committee Policy Conference in Washington, calling Obama’s outreach to Iran naive and vowing to “station multiple carriers and warships at Iran’s door.’’ The committee is a leading pro-Israel policy organization that holds hawkish views on the security of the Jewish state.

Romney’s GOP opponents have been no less relentless in characterizing Obama as dangerously docile. Santorum, who appeared before the conference in person, accused Obama of abandoning Israel, a key US ally.

Obama “says he has Israel’s back,” Santorum said. “From everything I’ve seen from the conduct of this administration, he has turned his back on the people of Israel.”

Newt Gingrich, also speaking to the group by satellite broadcast, dismissed the prospects of diplomacy, saying “The red line is now because the Iranians are now deepening their commitment to nuclear weapons.”

He vowed to do everything in his power as president to “undermine and replace the Iranian dictatorship.”

The only Republican candidate not threatening Iran with aggressive action is Ron Paul, the Libertarian-leaning congressman from Texas.

Obama spoke before the pro-Israeli group on Sunday, urging the influential organization to give sanctions a chance to work while also pledging to order a US military strike to prevent Iran from acquiring atomic arms should current efforts fail to halt the program.

The United States, with the help of other Western powers, is spearheading an international effort to boycott Iranian oil exports. The sanctions are believed to be having an effect, raising prices of meat and other goods and increasing public frustration with the regime.

Republican rhetoric about the need to act quickly against Iran has been countered by intelligence specialists. Recent US estimates have concluded that Iran faces a series of hurdles to successfully enrich enough uranium to make a weapon, let alone be able to deliver it by missile.

The nation’s top spy, James R. Clapper, told Congress in January the nation’s 16 intelligence agencies have concluded that while Iran is laying the groundwork for a bomb, there is no evidence it has made the decision to actually build a weapon.

On the Senate floor Tuesday, Senator John F. Kerry rebuked Romney for his bellicose talk. Romney’s op-ed, the Massachusetts Democrat said, is as “inaccurate as it was aggressive.”

“We should all remember that the nuclear issue with Iran is deadly serious business that should invite sobriety and serious-minded solutions, not sloganeering and sound bites,” said Kerry, chairman of the Foreign Relations Committee.

Obama emphasized that his policy is not containment, but to prevent Iran from obtaining a nuclear weapon. That said, “Israel is a sovereign nation that has to make its own decisions about how best to preserve its security,” he said.