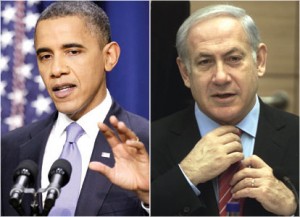 President Obama and Israeli Prime Minister Benjamin Netanyahu are publicly emphasizing their united front in the fight against the Iranian nuclear program, but as they head into high-stakes meetings Monday, it isn’t at all clear they share the same timetable for how to proceed.

Obama previewed his message with an appeal for patience, arguing in a Sunday address that the world should give sanctions time to work before launching military strikes against Iranian nuclear facilities.

But while Netanyahu said that he “very much appreciated” Obama’s acknowledgment of Israel’s right to defend itself, he did not remark on the American president’s call for more time.

The two men are scheduled to open their conversation with a brief joint appearance in public Monday morning. Reporters will see the two together in the Oval Office before their meeting, but it isn’t certain that there will be a post-meeting appearance to discuss their progress — if there is any — before the cameras.

Obama’s message on Sunday before the American pro-Israel lobby was designed to assure them that he understands and shares their concerns and is working to address them, said Robert Danin, a former U.S. government Mideast advisor now at the Council on Foreign Relations.

“Whether or not he succeeds will probably await his private meeting with Prime Minister Netanyahu,” Danin said.

Obama’s approach will probably have the effect of putting more pressure on Netanyahu in terms of domestic pressure, said Daniel Levy, a former Israeli peace negotiator who now heads the Middle East Task Force for the New America Foundation.

“It is likely to squeeze the space at home in which Netanyahu is operating,” Levy said. “And of course, much now depends on Netanyahu’s reaction.”

“It is fair to speculate he does not want to appear to be on the same page exactly as President Obama, given that Netanyahu’s closest friends and supporters in the U.S. are overtly aligned against the president and his re-election bid,” Levy said.

Republican critics are firing hard against the plan Obama will press for today. GOP presidential candidate Rick Santorum says Obama is not “doing very much” to prevent Iran from obtaining a weapon or to bring about a new regime in Tehran. Mitt Romney blames the Democratic president for failing to impose “crippling” sanctions and to make it clear military options are on the table.

Obama and Netanyahu share the goal of avoiding a military conflict because it threatens their re-election campaigns, according to Levy.

“Ironically, President Obama and PM Netanyahu have a shared interest of avoiding a conflict with Iran, which threatens their respective re-election campaigns,” Levy said. 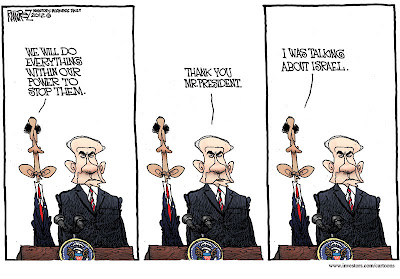