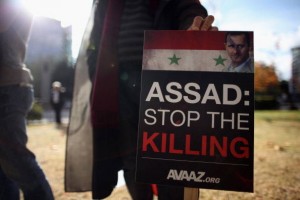 Beirut Lebanon – Syrian forces have killed more than 7,500 civilians since a revolt against President Bashar al-Assad began, a U.N. official said on Tuesday, and Hilary Clinton, the top U.S. diplomat, suggested the Syrian leader may be a war criminal.

“There are credible reports that the death toll now often exceeds 100 civilians a day, including many women and children,” U.N. Under-Secretary-General for political affairs Lynn Pascoe told the U.N. Security Council. “The total killed so far is certainly well over 7,500 people.”

Syria’s government said in December that “armed terrorist groups” had killed more than 2,000 soldiers and police.

As world dismay mounted over the bloodshed, France said the Security Council was working on a Syria resolution and urged Russia and China not to veto it, as they have previous drafts.

Secretary of State Clinton told the U.S. Senate it could be argued that Assad is a war criminal, but said using such labels “limits options to persuade leaders to step down from power.”

French Foreign Minister Alain Juppe had said on Monday it was time to refer Syria to the International Criminal Court and warned Assad that he would face justice.

However, Tunisia, where a revolt toppled a president last year, would be willing to offer Assad asylum if this would help stop the bloodshed in Syria, a senior Tunisian official said.

Juppe told the French parliament that work had begun at the Security Council on a resolution that “could order an immediate halt to the hostilities and (allow) humanitarian access while also renewing support for the Arab League plan.”

“I solemnly call on Russia and China not to block this Security Council resolution,” he said.

Russia and China vetoed a draft resolution on February 4 that would have backed an Arab League call for Assad to step down.

Russia’s Foreign Ministry said the U.S. ambassador to Moscow had discussed Syria’s “acute humanitarian issues” with a Russian deputy foreign minister on Tuesday – an indication they may have explored a potential U.N. Security Council resolution.

British photographer Paul Conroy, of London’s Sunday Times, was spirited safely out of Homs into Lebanon. “He is in good shape and in good spirits,” the newspaper said.

Conroy had been among several foreign journalists trapped in Baba Amro, where Marie Colvin, a veteran war correspondent also with the Sunday Times, and French photographer Remi Ochlik were killed in a bombardment on February 22.

Confusion shrouded the fate of wounded French reporter Edith Bouvier. French President Nicolas Sarkozy said he had been told that she had also reached Lebanon, but his own office and the French Foreign Ministry said they could not confirm this.

Opposition groups say hundreds of civilians have been killed or wounded in the siege of Baba Amro and other rebellious districts in Homs, where terrified residents are enduring dire conditions, without proper supplies of water, food and medicine.

The Syrian military’s latest bombardment of Baba Amro was the heaviest in a 24-day-old assault, activists said, adding that tanks from an elite armoured division, which is led by Assad’s brother Maher, had moved into Homs overnight.

The Syrian Observatory for Human Rights said at least 16 people were killed in Homs on Tuesday, a day after 84 were killed in the city, out of an overall death toll of 122 civilians across Syria. The British-based group said 29 security force members had been killed in clashes with rebels on Monday.

The reports could not be independently confirmed. Syrian authorities tightly restrict media access to the country.

The International Committee of the Red Cross said it had delivered food and other aid to Homs and Idlib, but called for a “humanitarian ceasefire” to improve access.

Assad, projecting an aura of normality in a land ravaged by conflict over his right to power, promulgated a new constitution on Tuesday after officials said nearly 90 percent of voters had endorsed it in a referendum two days earlier.

Opposition groups and Western leaders seeking Assad’s removal denounced Sunday’s vote as a charade that diverted attention from the violence in Homs and elsewhere.

In Geneva, the United Nations’ main human rights body was set to condemn Syria for “brutal” use of heavy weapons on residential areas and persecuting opponents, its fourth such rebuke to Assad since the uprising began last March.

Russia repeated its calls for Western and Arab nations to press armed opponents of Assad to stop fighting.

“Thanks to our work with the Syrian authorities, it was possible to lead them to interact with international humanitarian organisations, but we are not seeing similar signals addressed to the militants,” Interfax news agency quoted Deputy Foreign Minister Gennady Gatilov as saying in Geneva.

Trying to “instil democracy through force is doomed to disaster,” Gatilov to the U.N. rights forum in a swipe at Western interventions, notably in neighbouring Iraq.

Syria’s U.N. ambassador in Geneva, Faysal Khabbaz Hamoui, stormed out of the session after calling on countries to stop “inciting sectarianism and providing arms” to Syrian rebels.

The outside world has proved powerless to halt the killing in Syria, where repression of initially peaceful protests has spawned an armed insurrection by army deserters and others.

Foreign powers have argued over whether to arm Syrian rebels, but there is little appetite in the West for any Libya-style military intervention. Qatar and Saudi Arabia have advocated sending weapons to anti-Assad insurgents.

Assad says he is battling a foreign conspiracy featuring “armed terrorist groups” and al Qaeda militants, while pressing ahead with political reforms toward greater democracy.

His opponents scorn his calls for dialogue as meaningless while Syrian security forces are violently repressing dissent.

The Syrian leader says the new constitution will lead to multi-party elections within three months.

The opposition dismisses the reforms on offer, saying that Assad, and his father who ruled for 30 years before him, have long paid only lip service to existing legal obligations.