Massacre in Homs as Constitution approved 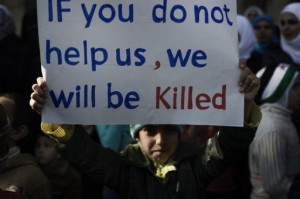 Beirut, Lebanon – Syria pounded the besieged city of Homs for a 26th day Tuesday as the bodies of 64 men found dumped outside the city awaited identification, activists said.

The men, taken to the Homs National Hospital, were believed to have been with an undetermined number of women and children who are missing, the opposition Local Coordination Committees said.

The men had tried to flee the daily bombardments by Syrian tank and artillery fire with their families when they were stopped and gunned down, and in some cases stabbed, by paramilitary thugs loyal to President Bashar Assad, the coordination committees and another activist group said.

“Shabeeha,” which roughly means “thugs” or “bullies,” refers to civilian-dressed men — including security forces, criminal gangs and unemployed and impoverished youths — hired as mercenaries by the Assad regime to rough up and kill opponents.

One of the men who tried to flee survived the slaughter and sought refuge in a nearby village, only to be handed over to Syrian security forces, the Star said.

The Washington Post said the massacre appeared to be one of the worst instances of mass killing since the uprising against Assad’s dictatorship began last March.

The deaths were among 70 reported across Syria Monday, including 25 in Homs’ embattled Baba Amr neighborhood.

The accounts could not be independently confirmed because journalists are not granted visas to work in Syria.

Among those trapped in Baba Amr early Tuesday were two foreign journalists who entered the country illegally and were injured last week in a rocket attack that killed former United Press International journalist Marie Colvin, who was working for the British Sunday Times, and French photographer Remi Ochlik.

Poland sought to negotiate safe passage out of Homs for two injured journalists, Edith Bouvier of the French newspaper Le Figaro and British photographer Paul Conroy of the Sunday Times, as well as the bodies of the two who were killed, the Star said.

But the effort stalled Monday, the newspaper said.

Poland represents U.S. interests in Syria, now that the U.S. Embassy in Damascus is closed.

The official Syrian Arab News Agency reported the funerals Monday of 16 soldiers and policemen killed in the violence nationwide.

The violence and diplomacy came as SANA reported 89.4 percent of voters in Sunday’s referendum endorsed a Constitution that would allow Assad to remain in power until 2028.

U.S. and European leaders condemned the vote, calling it a meaningless ruse to ensure Assad’s survival rather than bring about genuine reforms.

He called the turnout “good,” “despite the threats and intimidation by armed terrorist groups in some areas and the accompanying distortion and instigation campaigns by media.”

The Assad regime refers to its opponents as terrorists.

Western leaders and regime opponents called the referendum a farce and its result a hoax.

Meanwhile, European foreign ministers froze the assets of several Syrian government officials, imposed sanctions on the central bank, prohibited the purchase of gold, precious metals and diamonds from the country and banned Syrian cargo flights from the European Union.