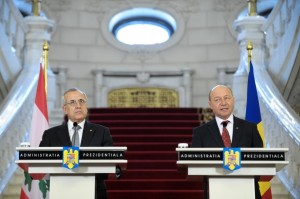 Lebanon will demand that Syria be allowed back into the Arab League when the pan-Arab grouping holds its summit next month, President Michel Suleiman said on Tuesday.

“Lebanon is standing by its position that no Arab nation should be left out of this organization,” Suleiman told a press conference in Bucharest. “The Arab League does not represent only [political] systems but also nations.”

But Suleiman, who is on a two-day visit in Romania, said that Lebanon would nevertheless remain committed to whatever decision was taken by the Arab League, which is to hold a summit in Iraq in late March.

The Arab League voted in November to suspend Syria’s participation in the 22-member body over the bloody crackdown on protesters by President Bashar Assad’s regime.

Iraq said earlier this month that it would not invite the Syrian government or the opposition to the Baghdad summit.

Lebanon’s political scene is split between supporters of the Syrian regime, led by Hezbollah which has endorsed Assad’s claim that he is fighting terrorists , and the March 14 alliance which is supporting the Syrian pro-democracy revolution. Suleiman , PM Nagib Mikati and PSP leader MP Walid Jumblatt claim to be centrists, but the Lebanese cabinet is heavily influenced by the Iranian and Syrian backed Hezbollah militant group

The violence in Syria has killed more than 7 600 people since March, according to the Syrian Observatory for Human Rights monitoring group.

Romanian President Traian Basescu said Bucharest backed the stance of the European Union, which on Monday beefed up its sanctions against the Syrian regime.

Citing the example of Romania’s former dictatorship, which was toppled after a violently repressed uprising in 1989, Basescu said that no head of state can cling to power after opening fire against his own people.

“I am aware of the particular situation in Syria, where president Bashar is still quite popular and where part of the armed forces are still loyal to him,” Basescu said.

“But the principle according to which a head of state who opens fire against his people can no longer remain in power still stands.”

Lebanon ranks first among Arab investors in Romania, said the Romanian president. He also added that Lebanese stability is vital for the Middle East region and that Romania is ready to contribute to consolidate Lebanon’s stability.

“I said Romania is ready to donate military equipment and ammunition to consolidate the Lebanese army’s capacity. I assured Mr Suleiman we are ready to increase the number of scholarships for Lebanese students, based on the education priorities of the Lebanese Government. Via the bilateral agreement, we can train Lebanese officers in our Military Academy,” said the Romanian President.

Romania previously donated ammunition to the Lebanese army in 2008.

President Suleiman, on an official visit to Bucharest until February 29, thanked President Basescu for having supported Lebanon’s sovereignty and integrity.