Lebanon to skip “Friends of Syria” conference in Tunisia 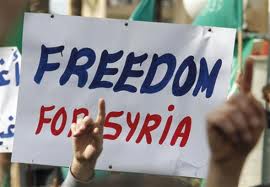 Prime Minister Najib Mikati, whose government has adopted a policy to dissociation from the 11-month-old unrest in Syria, has said that Lebanon cannot attend the planned “Friends of Syria” conference in Tunisia.

Citing the presence of Hezbollah, Syria’s main ally in Lebanon, in the Mikati government, Ahmad Hariri secretary-general of the Future Movement said : “ How can we expect real participation in light of a government controlled … by Hezbollah?” Hariri also asked. “Do we expect the foreign affairs minister, who has become the official mouthpiece of the regime of Bashar Assad, to participate? Of course not,” he said.

Nevertheless Ahmad Hariri, urged the government Monday to attend this week’s conference in Tunisia aimed at calling for a political change in Syria.

“If we are keen on Syria’s interests then we need to participate,” Hariri told the online Elnashra website.

Meanwhile, Progressive Socialist Party leader Walid Jumblatt decried Syrian President Bashar Assad’s call for a referendum on a new constitution that would create a multiparty system in the country and urged Syria’s allies, Russia and Iran, to help ensure a transfer of power instead of supporting the embattled president.

Jumblatt also reiterated his call for the Syrian Druze not to join the Shabbiha, or armed thugs, fighting anti-regime protesters. “The future is for the free people in Syria, and your natural position is to stand by them,” he said.

Last week, Assad, facing the most serious challenge to his 11-year rule from the uprising, ordered a referendum on a draft constitution on Feb. 26 that limits the presidency to two seven-year terms and allows for multiple parties. Syrian opposition groups have rejected the new constitution and urged voters to boycott the vote. They maintained that Assad’s departure is the only solution.

Tunisian Foreign Minister Rafik Abdessalem said Monday that Syrian opposition parties would take part in the conference to which EU and Arab League members as well as China, Russia and the United States have been invited. “We believe that on the 24th of this month, we shall send a strong message to the Syrian government,” Abdessalem told reporters in Rome. “There has been enough killing. There must be radical political change.”

According to an estimate by the Local Coordination Committees of Syria, a network of opposition activists, over 9,000 people have been killed in the 11 months of Syria’s uprising.

Deputy head of Hezbollah’s Executive Council Sheikh Nabil Qaouk launched a scathing attack Monday on the March 14 parties, accusing them of arming the Syrian opposition and using the unrest in Syria to regain power in Lebanon.

“Where is the ‘Lebanon First’ slogan? They have stomped on this slogan and now their slogan has become ‘Syria First’ because through Syria they want to return to power,” Qaouk told a Hezbollah rally in the southern town of Adloun.