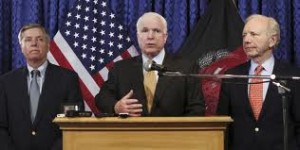 A delegation of U.S. officials including Senator John McCain met Egyptian officials in Cairo before a trial of nongovernmental workers including 19 American citizens that threatens to derail relations between the two countries.

McCain and U.S. senators Joe Lieberman and Lindsey Graham discussed the case today with Field Marshal Mohamed Hussein Tantawi, head of the ruling military council. The criminal trial of 43 NGO workers, who face charges that include illegally accepting payments from abroad, is due to begin on Feb. 26. The son of U.S. Transportation Secretary Ray LaHood, who works for the Washington-based International Republican Institute, is among the accused.

“Egypt is changing, it is true, and as such, the nature of America’s partnership with Egypt is also changing,” the Associated Press cited McCain as saying at a meeting of U.S. and Egyptian executives. “We must maintain and strengthen the key pillars of that partnership, especially our commercial and trading relationship and where the people of Egypt and their newly elected government make the right decisions about the policies that will shape their sovereign nation’s future.”

Egyptian politicians and media have issued accusations of foreign meddling just as the country seeks loans from the International Monetary Fund, in which the U.S. is the biggest shareholder. Egypt has applied for $3.2 billion in IMF credit to help repair an economy that has stagnated since the uprising against Hosni Mubarak a year ago. Tourists and investors have shunned the country and international reserves have dropped by more than half.