Syria: Residents bracing for the worst in Homs 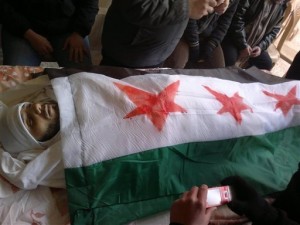 As conservatives in Washington urged President Barack Obama to take action on Syria, CNN’s Arwa Damon reported Friday that new violence was expected. And sure enough, the violence came.

CNN cannot confirm the authenticity of the footage Damon discusses, but the clip appears to show the vantage point of snipers. Reports say Syrian President Bashar al-Assad has been ordering attacks on citizens.

Damon and CNN’s Ivan Watson are reporting from Syria despite the country’s attempt to block journalists.

Damon said residents are bracing for the worst in Homs, where the intensity of the attack by Syria’s government is overwhelming. Women, children and men have been desperate to tell Damon their stories.

Activist Omar Shakir told CNN he is confident the Syrian army is preparing for a massive ground invasion of the besieged neighborhood of Baba Amr, the heart of the revolt.

“Just like every day, the residents of Baba Amr woke up (Sunday) to the sounds of violent bombing, as al-Assad forces continue to use different types of weapons, bombs and rockets in their attacks,” he said.

Sunday, 10 people in Homs were among the at least 23 killed across Syria, according to the Local Coordination Committees of Syria, a network of opposition activists. In the 11 months of Syria’s uprising, almost 9,000 people have been killed, the LCC estimates.

Photo: In this Feb. 19, 2012, the dead body of anti-Syrian regime protester is seen wrapped by the Syrian revolution flag.