Iran deploys its warships to the Mediterranean 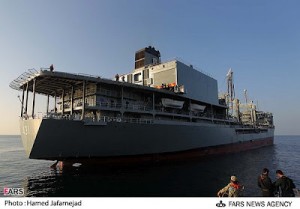 Iranian warships entered the Mediterranean after crossing the Suez Canal on Saturday to show Teheran’s ‘might’ to regional states, the navy commander said, at a time of simmering tensions with Israel.

In Jerusalem, the foreign ministry said Israel will be watching the ship’s movements closely to ensure they do not approach its coast.

‘The strategic navy of the Islamic Republic of Iran has passed through the Suez Canal for the second time since the (1979) Islamic Revolution,’ Admiral Habibollah Sayari said in remarks quoted by the official IRNA news agency.

He did not say how many vessels had crossed the canal, or what missions they were planning to carry out in the Mediterranean, but said the flotilla had previously docked in the Saudi port city of Jeddah.

Two Iranian ships, the destroyer Shahid Qandi and supply vessel Kharg, had docked in the Red Sea port on February 4, according to Iranian media. 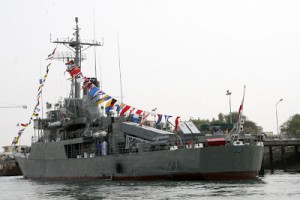 Sayari said the naval deployment to the Mediterranean would show ‘the might’ of the Islamic republic to regional countries, and also convey Teheran’s ‘message of peace and friendship.’

The first Iranian presence in the Mediterranean in February 2011 provoked strong reactions from Israel and the United States, with the Jewish state putting its navy on alert.

During the 2011 deployment, two Iranian vessels, a destroyer and a supply ship, sailed past the coast of Israel and docked at the port of Latakia in allied Syria before returning to Iran via the Red Sea.

The latest announcement comes amid heightened tensions between Iran and Israel, fuelled by a longstanding dispute over Teheran’s nuclear programme and rising speculation that Israel might launch pre-emptive strikes against Iranian facilities.

Israeli officials are also accusing Teheran of orchestrating anti-Israeli bombings in India and Georgia as well as blasts in Thailand. Iran denies the allegations.

Israeli leaders has denounced the naval deployment as a ‘provocation’ and a ‘powerplay.’

And on Saturday, an official of the Israeli foreign ministry said without elaborating that ‘we will closely follow the movement of the two ships to confirm that they do not approach the Israeli coast.’

Iran’s navy has been boosting its presence in international waters in the past two years, deploying vessels to the Indian Ocean and Gulf of Aden on missions to protect Iranian ships from Somali pirates.

And Iran sent submarines to the Red Sea last June to ‘collect data,’ its first such mission in distant waters, while its naval commanders say they plan on deploying ships close to US territorial waters in the future.

Iranian naval forces are composed of small units, including speedboats equipped with missiles, which operate in the Gulf and are under the command of the elite Revolutionary Guards.

It now permanently has at least two vessels in those areas to escort merchant ships, and has been involved in more than 100 confrontations with armed pirates, according to the navy commander in December.